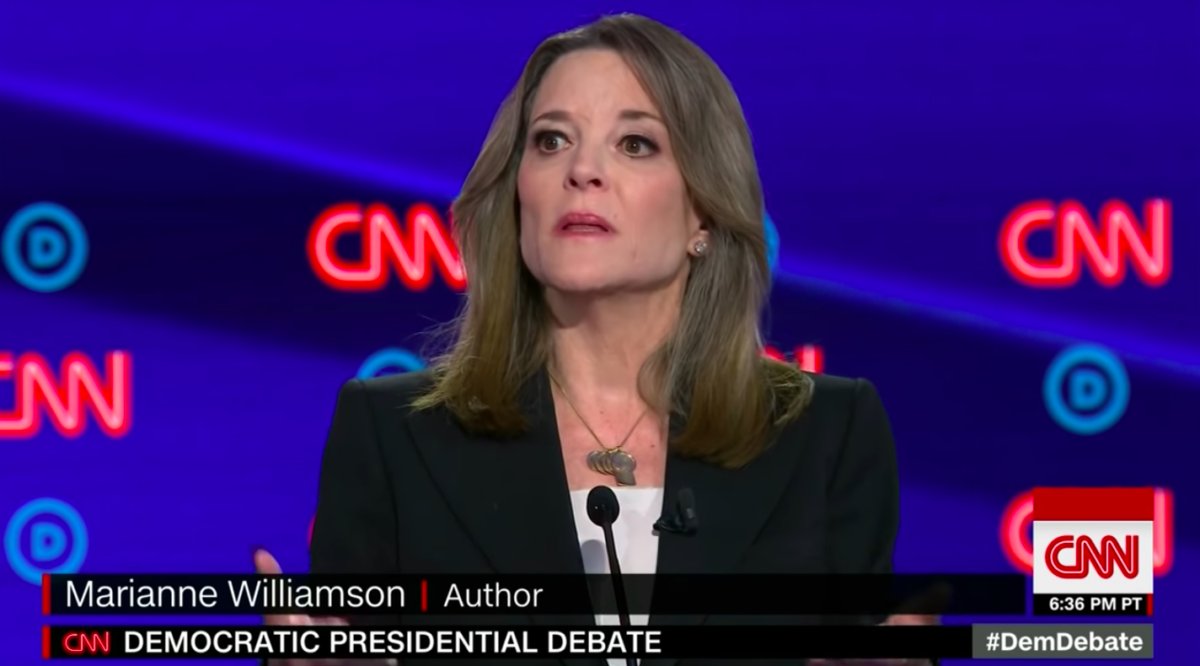 While Marianne Williamson attracted a significant amount of media attention for her performance in CNN’s Democratic primary debate last week, her seemingly strong showing has not helped her in the polls, as Williamson is stuck hovering around zero percent in the race.

Despite going into the debate at below 1 percent in the polls, Williamson received a considerable amount of speaking time during her Tuesday night appearance in Detroit. The presidential hopeful and self-help author went viral with one-liners warning against the “dark psychic force of collectivized hatred” destroying America; Williamson was also the most searched for candidate after the debates.

According to media audience tracking data from Deep Root Analytics, Williamson received 68.7 million TV impressions, which was just behind the 230 million for Sen. Elizabeth Warren and the 208 million about Sen. Bernie Sanders. Mentions of Williamson’s name marked a quarter of the candidate name drops during ABC’s coverage of the debate, reports Politico. As for print coverage, publications like the New York Times, the Washington Post, and the New Yorker penned numerous articles on Williamson and her “moment.”

However, the media exposure on Williamson’s outside candidacy has not materialized in any boosts at the polls. A survey of registered Democratic primary voters by Politico/Morning Consult found that just 2 percent of viewers believed that Williamson won the debate, while 8 percent chose her as the Democratic candidate they are most likely to not vote for. Zero precent of respondents selected Williamson as the candidate they would choose to defeat Trump in the general election.

The Real Clear Politics average has Williamson polling at 0.2 percent overall in nationwide polls. The Quinnipiac poll out today has her at 0 percent.

While the media attention did not raise her poll numbers, this new coverage has often shifted away from Williamson’s platform of “love,” to now scrutinizing her past anti-science views instead. The Return to Love author previously dabbled with anti-vaccination conspiracies, suggested work in the medical field on depression is a “scam,” and once wrote that “cancer and AIDS and other physical illnesses are physical manifestations of a psychic scream.”

A piece in the Washington Post on Tuesday went so far as to argue that Williamson hurt the Democratic debates by receiving “free air time” and should instead be sent to a smaller stage with other low-polling candidates:

“Democrats seem to have wound up with the wrong format with the wrong participants. They really need to rethink a process in which Gabbard and Marianne Williamson have gotten free air time, but experienced senators and governors — including many of the most articulate moderates such as Montana Gov. Steve Bullock, Sen. Michael F. Bennet (Colo.), former Colorado governor John Hickenlooper, etc. — may be weeded out before a single vote is cast. The answer may be to revive the “kiddie table,” allowing top contenders to face one another on a less crowded stage, and rewarding candidates who can break out (as Carly Fiorina did in 2016 on the GOP side) from the stage of lesser-knowns.”