SPOILER ALERT: To be clear, as the headline suggests, the video below contains the BIGGEST possible spoiler for HBO’s ‘Game of Thrones’. Like, the whole enchilada. If you didn’t watch the finale, but still want to, do not watch this clip. Also, don’t read this post. In fact, go away and watch it already. Fair Warning.

In a View segment that rivaled the “Game of Thrones” finale itself in entertainment value, Meghan McCain spoiled the ending of the show, and the series, in a blurted comment that caused a Stark-side-of-the-Red-Wedding reaction among her co-hosts. And no doubt the internet at large.

The end of the series was the subject of the show’s Hot Topic segment on Monday, and dedicated fan McCain was there for the fan-favorite pastime of being disappointed with it, but not everyone was ready to hear the end. Although to be fair to McCain, and as she pointed out, it was the Hot Topic. And that topic was introduced by Whoopi Goldberg.

“Apparently we’re at the ends of a giant era of pop culture. It came to close last night with the series finale of “’Game of Thrones’. And this morning there are actually counselors you can reach out to if you’re having a hard time with it,” said Goldberg. “Anybody having a tough time?” 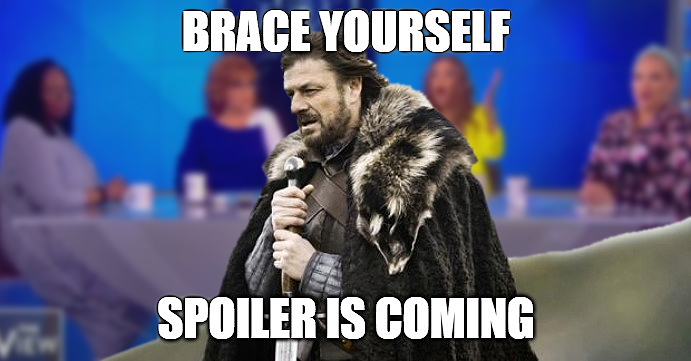 “I spent eight years of my life watching this. And it was a horrible ending. Bran is the worst,” said McCain. “Sorry spoiler.”

But she continued. “He didn’t do anything and now he gets to rule? Should have been the mother of dragons–”

The two repeated those points, McCain claimed that she wasn’t told not to spoil/it’s all over the internet, and Hostin claimed that she is only on season four, several more times through the remainder of the segment. The reactions of Hostin and Goldberg were priceless, though.

Another good laugh came when Hostin was explaining that she had to stop watching the show with her son “when all the sex started happening”, and Behar said, “I was wondering why my husband’s watching it, constantly.”

McCain also said “apparently I’m going to get the wrath of the internet when I leave,” and the camera showed the producer nodding his head emphatically at that.

They closed by explaining that therapy and counseling are available by phone for people who are very upset with the end of the show. Perhaps some folks will be calling those numbers today to talk about how The View spoiled the ending for them.

Watch the hilarity above, courtesy of ABC.