Andrew Zimmern On His Imitators

Andrew Zimmern Smacks Down His Imitators, Calls Them ‘Embarrassing’ 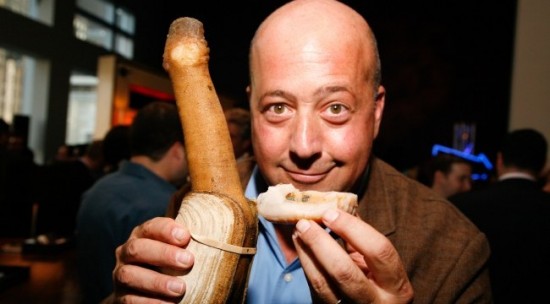 Andrew Zimmern sounds like a right gent in the first two segments from a longer interview with Food Republic at the Austin Food and Wine Festival.

Though Zimmern has some insightful and eloquent words for his compatriot in television arms Anthony Bourdain (“He’s one of the most brilliant social commentators that we have”), as well as what he hopes his show can accomplish, he saves his harshest criticism for his imitators fixating on the LOOK AT THIS GROSS THING I’M EATING factor:

“I really do feel like everyone who came after [me and Bourdain] is extremely derivative.  I see people doing one year runs on these obscure cable channels, doing TOTALLY CRAZY FOOOOOOOD!, I’m just like, ‘My god.  How embarrassing for them.'”

He never explicitly connects the two, but you can’t help thinking later in the clip that Zimmern finds those chefs also somewhat responsible for the recent foodie obsession with eating weird foods:

“The degree to which we ‘fantasticize’ eating things like crispy intestine tacos, is almost the degree to which we shame and humiliate and set apart from the [First World], and the folks in other culture that don’t have as much as we do…and we marginalize them. And that’s exactly the opposite of what I’m trying to do.”

In the following clip, Zimmern wonders why his fans think cow hearts are disgusting, but hotdog “tube steaks” full of mystery meat aren’t. (A very good question, we might add.) You also get the sense that Zimmern can’t quite believe that his tweets could possibly get an MLB team to change their stadium menu, but it sounds like that’s exactly the case.