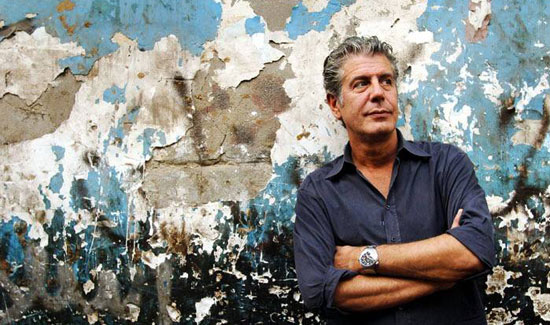 In the second half of our interview with Anthony Bourdain, the masterful social commentator tackles the ethics of endorsements, the “giant shit sandwich” Eddie Huang refused to eat, and whether or not we’ll ever see a comeback of the Golden Clog Awards. Read the first half here to catch up, and then read on.

Spike Mendelsohn announced recently that he suffers from acid reflux and he’s endorsing a heartburn drug from one of the largest pharmaceutical companies in the world. I’m not going to make you get into the whole Paula Deen thing, but I do think there’s a huge relationship now between chef’s and endorsements, their own products or Tom Coliccio and Diet Coke. Is there a clear line between what is and isn’t ethical, in your mind?

I don’t know. I mean… [He sighs] It’s a question each person has to ask themselves. You know, “What can I live with tomorrow? When I wake up and look in the mirror tomorrow, do I want to be the spokesperson for a particular food or beverage or drug or something like that?” Obviously, I’m out of touch in this area. [Laughs].

What about The Golden Clog Awards? Is there any chance you’ll be bringing those back?

Oh my god. Poor [Michael] Ruhlman. I suckered him into doing that with me and he was like black-balled in the industry for like two years. He’s still smarting in the perineal region from that experience.

We may find ourselves blackballed, but that’s part of what we want to do. There are so many chefs out there that deserve celebrity, so many that don’t, just so many that there has to be someone calling them out a little bit. I am a huge fan of chefs, of the industry, of food and cooking, and I think the idea is that for all the hot air we take out of their balloons, so to speak, we put as much back in. But we would die if the Golden Clogs came back.

Well, if you care to sponsor them. We might start them up again.

Maybe we’ll partner on those!

What was funny about that experience is that it was intended as a pretty light-hearted thing. We reached out to Tyler Florence and said, “Hey Tyler, do you want to accept the Golden Clog awards for Worst Career Move?” for his Olive Garden endorsement —

It was Applebees, I think.

Applebees, or whatever. So we said, “It’s called the Rocco Award.” And Rocco was cool enough to volunteer to present the award. He said he’d do it. And apparently there was some late night heavy-breathing phone calls from the network saying, “Don’t go anywhere near this.” And it was pretty shocking, you know. People who I’d considered friends, at the last minute suddenly had other things to do.

To play off of that, how much power do you think the networks have? Eddie Huang has talked about potentially doing a show, then not doing a show, and said that the network asked him to tone it down with how he speaks about his fellow network stars, but he refused. How much influence —

I really admire, I really admire him for [it]. You know, he had it all on the plate. Along with all the riches and fame that they were offering, there was a big shit sandwich sitting on that plate. And when he said, “Wait a minute! I don’t want to eat it!” They, of course, say, “Hey, but look! Everybody else ate it! Everybody else! Look! Him! And her! They all ate it! They all took a big bite out of this shit sandwich! Now you eat it!” And he said no. Which is awesome. I really admire him for that.

How much power do they have? They certainly have the power to make you, [especially] people who have a relationship or are terrified of displeasing them. I know people on that network who used to call the president of the network every day, and they’d ask him, “How’s my hair? Do you like my hair? Is my hair okay? Do you think the new haircut will make a difference in the ratings?” What can I tell you? People I know who don’t even work for them anymore are still afraid of offending them. “Oh, they made me. I might need them again. I’m not gonna piss them off.”

Do you think they have any power or influence over chefs that have never worked with them or who aren’t on their roster?

No, I mean, clearly there is a business model to be made out of just taking a big piss on them at every opportunity. I mean, it certainly worked for me!

And that’s how you made it! My final question was actually about being outspoken and how much personality comes into play with chefs. Is all press good press? Do they need to be on Twitter?

On the other hand, it sure as hell helps. And an understanding of social media clearly is a huge advantage. If you look at who understands it and uses it well, and who’s still bridling at the ability… There are a lot of chefs who are shockingly — actually, not surprisingly; understandably — upset by every single bit of criticism. A single tweet, a single post on Yelp saying your restaurant has gone downhill or it sucks. And it really hurts them or really upsets them. It’s their whole identity, it’s everything they’ve worked hard for and they have a very hard time living in the same world as Yelp or Eater or Twitterers who eat at their restaurant and five minutes later say, “That was the worst shit I ever ate in my life.” They have a really hard time dealing with that. Others have learned, or are learning to, just live with that, put it aside, and harness the incredible power of social media and the internet for their own ends. Some people do it really, really well. There are others who are decent at it. And a lot of people who are really spectacularly bad at it.

So, social media at this point is a bonus.

You can make a business on it. You can drive viewers to your television show. You can drive people to your restaurants, your books. When you look at pioneers like Roy Choi, Ludo Lefebvre, these guys really got it early. And they’re really good at it. And then other people like David Chang who are surprisingly adept at it without having to go the conventional route. I mean, who would have seen Dave Chang as master of all media? But he kind of is.

He’s great on TV, he’s got the hottest print publication and best food magazine out there. He’s a strange and entertaining Twitterer, using it not just to talk about basketball and what he’s listening to but to communicate with some of the most extraordinary chefs in the world. Mario [Batali] seems to spend two hours in the morning and two hours late at night answering every single fan’s question on whether they should rinse their pasta, so it’s interesting to see how chefs from the old guard and the new are taking to social media and it’s really fun to watch. I mean, I follow a lot of them. Watching Jeremiah Tower discover Twitter, for instance, is really fun.

Is there a must-follow for you? Is there one person who you think is really doing it right?

Well then, let me ask, how do you feel about Ruth Bourdain?

You know, I always felt flattered and entertained. I’m all for it. I mean, you know, you’re in the public eye, people are going to make fun, and god knows, I do it. Why shouldn’t people do it to me?

Any parting words or last thoughts?

Just that I honestly believe that a desire to cook at all, but specifically a desire to cook well, to excel, to feed other people, is really and truly a noble calling. It is rarely a high art, but I think it is a good and noble thing, a good and noble calling, and I think it is, generally speaking, wherever you are in the world, no coincidence that it is done by good people.

Previously: Anthony Bourdain On Why The Best Celebrity Chefs Just ‘Don’t Give A Fuck’