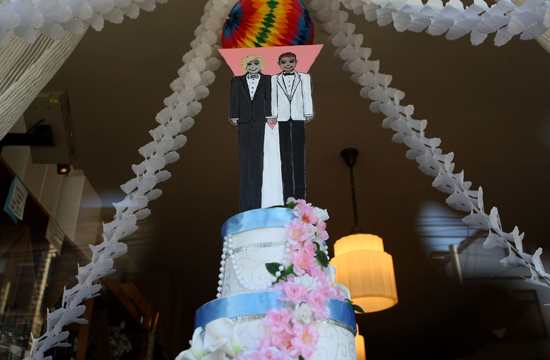 Earlier this year, we reported on a few bakeries who were thrust in the national spotlight after they refused to bake wedding cakes for gay couples, citing their religious beliefs. Whether that’s constitutional or not is a completely different subject, but the story wrought tons of outrage (and a moment where Duff Goldman did a good deed with a cake), and got a reporter from Portland’s Willamette Weekly thinking: if Sweet Cakes by Melissa and Fleur Cakes both refuse to do gay wedding cakes, do their beliefs extend to refusing to honor, say, a celebration of Pagan gods or cloning?

Apparently not: while Fleur did not return a few of the un-godly requests for cake, Sweet Cakes were more than willing to accomodate cakes for divorce parties, babies born out of wedlock, a Wiccan celebration for the summer solstice (pentagram included), and a non-kosher barbecue with lobster, steak and pulled pork sandwiches. (For all our readers of the Levite tribe, we meant no offense.)

This following exchange, however, is the best:

WW Asks – I was wondering if you could do two little cakes. My friend is a researcher at OHSU and she just got a grant for cloning human stem cells, so I thought I’d get her two identical cakes—basically, two little clone cakes. How much would they cost?

Although technically that’s a bit of a “gotcha” — if she really wanted to test the limits of Sweet Cakes’ ethics, she would have said “embryonic stem cells” — clone cakes are sort of adorable. Okay, really adorable. (Except that one of them will die a very early death, so, uh, not so cute.)