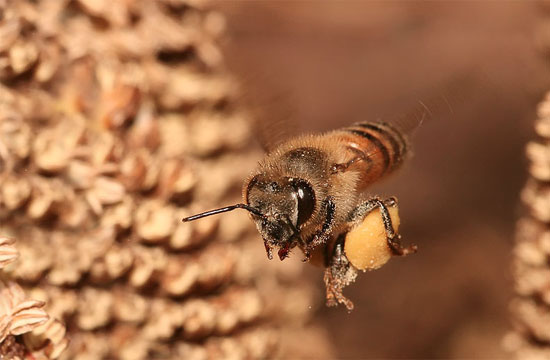 Though we fear bees with a healthy passion, the news that nearly one-third of America’s bee population died last winter is grave enough for us to 1) accept bees for what they are, and 2) acknowledge the potential disaster facing the U.S. agricultural industry.

While the cause of the bees’ disappearance remains unclear (drought? Pesticides? Colony collapse disorder? Burnout? Accumulated vacation days?), the effects are already being felt. For instance, the barely-adequate Californian bee population meant that this year’s U.S. almond crop would have been un-pollinated, and therefore un-harvestable, had it not been for a few months of near-perfect weather.

The bee problem follows a long list of external challenges facing food production, such as last summer’s drought, the dwindling meat supply, and rising costs, slowly chipping away at the U.S. food system. But even more sobering is the thought that whatever is affecting honeybees might affect other pollinators as well, like bumblebees and butterflies, which we can’t observe.

“Thinking of honeybees as our canary in the coal mine, a monitor for environmental conditions, is very appropriate,” [entomologist Diana Cox-Foster at Pennsylvania State University] said. “With honeybee colonies, you have the ability to open them up and see what’s going on. There are many other species needed for pollination, but with most of those, we don’t have the ability to see what’s happening.”