Breakfast Links: Did You Know that Anthony Bourdain Has a Lot to Say? Shocking! 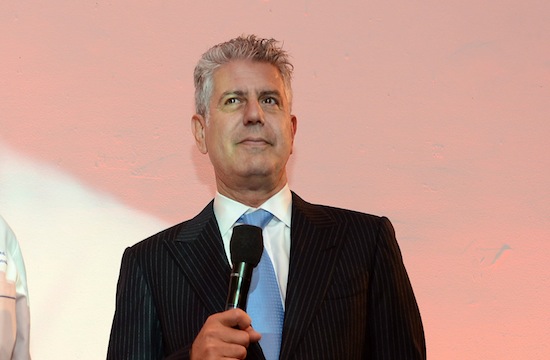 Grub Street: For 99 cents you can get 9,999 opinions from Anthony Bourdain — kidding! Sort of. Grub Street alerts us to a 10,000-word interview with David Blum on Kindle Singles, which we know will be chock-full of opinions. Just from the Amazon description alone: “From his drug-addled youth (‘I wanted to be a heroin addict long before I could get my hands on any heroin’) to the crowd-sourcing of food criticism (‘the chickens have gnawed their way through the chicken wire’), author-chef-television host Anthony Bourdain lets loose on himself and the food world in a wide-ranging and provocative Kindle Singles Interview.” Bourdain letting loose? You don’t say!

DNAInfo Chicago: Homaro Cantu is opening up a coffee shop called Berrista Coffee, and found a clever way to drum up Facebook support for it. And he promises to bring the molecular gastronomy touch to your cup of coffee and donut, using the “miracle berry” (which sounds more like a diet supplement than anything) to make pastries of the non-Dunkin’ Donuts variety.

New York Daily News: If you want to know what your salad would look like with a bunch of dead bees in it, click away. Otherwise, avoid at all costs George David Gordon’s newest cookbook, Eat-a-Bug.

The Cut: Blake Lively is dangerously close to entering Gwenyth Paltrow GOOP territory, but totally redeems herself by reminding the world that the Cheesecake Factory is awesome. Michelin-star worthy. We’re dying.

Food Republic: Everyone’s buzzing about how craft beer has become so hugely popular that the bubble might burst — but never to fear, dudes are here to explain to the weak ladyfriends out there why craft beer is good. It may not be your glass of Pinot Grig, but it’s still okay, ladiezzzz! (You think it’s only men drinking craft beer, despite that craft beer earned $34 billion in the last year? FACEPALM.)