Breakfast With Bobby Flay: On Creativity, Competition, and Being the Mayor of New York City 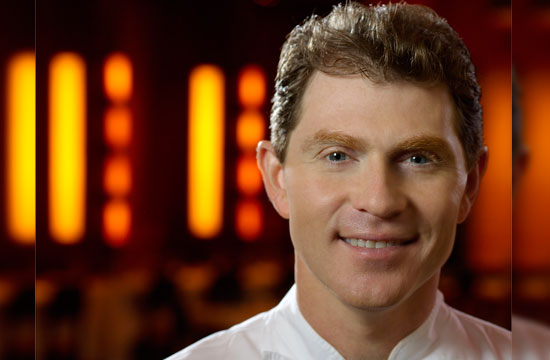 “Creativity is a huge subject and it can be broken down in lots of different ways,” says Bobby Flay. We’re in the empty dining room of Bar Americain on a recent Saturday morning, line cooks shoveling down a staff meal near the kitchen, and Flay has just presented me with breakfast and coffee. I gulp it down black. He’s tired, I can tell — his voice rasps after a night of charming hundreds at a food festival, his shoulders slump over our table after a late, late dinner at the new Toro — but he never drinks his coffee, and doesn’t need to.

Flay waves a hand at my scrambled eggs — an old-timey Hangtown Fry from the California Gold Rush — as if presenting a new car. “This is a perfect example,” he continues. “One of the stories is that a guy that made a ton of money was staying in a hotel and said, ‘I want the most expensive dish you can make me.’ It wound up being eggs, because they were so delicate and hard to travel with; bacon, which at that time was very, very, very expensive; and oysters, because they had to get them from San Francisco a hundred miles away. It would be like eating truffles and foie gras today.

“I didn’t create this dish,” he admits with a shrug. “But they probably weren’t frying the oysters, and they probably weren’t using lardons, chives and creme fraiche in it.” The subject of riffing on classics comes up again and again during our breakfast. And over the course of a couple hours, I start getting a sense for the Flay MO: a kind of perpetual riff that pervades everything from cooking to politics.

It starts with food, of course. On the surface, Flay’s culinary approach seems incredibly simple and reductivist: take classic dishes, something well-known, elevate it to the standard of Bobby Flay, a standard built on classical French techniques but adorned — or perhaps honed — with brassy American efficiency. (It would certainly explain the premise of Throwdown! With Bobby Flay, the show where he literally does that with some poor grandmother’s secret chili recipe every week.)

But to Flay, there’s a difference between outright stealing and creating something out of the elements of other people’s works. “I didn’t invent the egg,” he explains. “I wasn’t the first one to scramble it. Until you invent everything that’s on the plate — not just combining the things or creating a technique with them — but until you start finding the ingredients that no one’s ever found before, then it’s not your food.”

I down my second cup of coffee, Flay’s untouched cup grows colder, and we keep talking about his burger chain, his other restaurants (including the death of the 15-year-old Bolo: “Not only did they not extend my lease after my initial 15 year lease, they knocked the building down to make sure I really left!”), and his hyper-competitive drive, which he credits for changing food television. Specifically, he cites the controversy surrounding his first battle against Iron Chef Masaharu Morimoto 13 years ago, where Morimoto — back in his days as Chairman Kaga’s Iron Chef — dissed Flay for standing on a cutting board.

“I became the ugly American overnight,” he recalls, remembering how the Japanese media were aghast at his antics. “The media just kind of picked up on it, and I took it on the chin, but unintentionally. But it changed the Food Network forever…It went from cooks behind the stove, showing you how to chop onions, to pop culture.”

And while he’s now good friends with Morimoto, he is still a competitor at heart — though probably more genteel than in his youth. “When I was a kid, I used to get into fights all the time. I mean, I was a New York City kid. I’m tired of that.” Even when Gordon Ramsay — the one chef possibly more competitive than Flay — insulted his skills, Flay insisted that they settle it like gentlemen (via, of course, a televised showdown in front of Caesar’s Palace).

“He started spitting some stuff about me in some magazine, and the last thing I’ll do is — I don’t fuck with anybody for no reason, unless I feel like I’m being fucked with. And then I’m like, okay, what do you wanna do about it? That’s always been my MO.”

That’s an interesting perspective on competition, considering Flay, 48, has publicly pondered a future run for Mayor of New York.

It’s a weird prospect, he allows, especially for a high school dropout like himself. How do you formulate a public education policy when you didn’t complete your own? But the idea has been fueled by multiple media reports, generated mostly from Flay’s own mouth.

“I’m not ready to do it. I love what I do now. And so I can’t do both; I can’t be mayor of New York and also the Mayor of Bar Americain,” he says. “But I think that I might at some point down the line.”

The past two mayors were a U.S. Attorney and a multibillionaire CEO technocrat. But for those who might suggest that a chef with a small restaurant empire isn’t qualified to run a city, Flay thinks the very opposite: “I actually think that being in the restaurant industry helps you prepare for it,” he insists. “I think a good mayor of New York needs to be able to organize, inspire people, hire the right kinds of people, listen to what his customers need or what the people who live in the city are saying in terms of what’s good and what’s not good in terms of what they need more of. It’s like running a restaurant.”

A product of the Ed Koch era, Flay knows a fair amount about the city’s political history, and he describes himself as a centrist — “I think that if you’re too far to the right, or too far to the left, it’s a huge mistake. You’ve gotta be somewhere closer to the middle” — but in the case of this election cycle, which he’s watching closely, he’s got his mind made up. “The city is so incredibly diverse that — that’s actually one of the things that’s about to scare me about what’s gonna happen here.”

“With Bill DeBlasio?” I ask. (As of Election Day, the Democratic candidate led his opponent, Republican candidate Joe Lhota, by staggering 40-point margin.)

“Yeah.” Flay pauses for a moment and lowers his voice. “He’s way left. Way, way left…There’s obviously a lot of people in this city that need lots of assistance and help and opportunity, but that’s not everybody that makes up this city, you know.”

Flay isn’t wrong. Among 10 million New Yorkers, the city is home to some 70 billionaires and over 380 millionaires, including Flay, who, presumably, don’t need much assistance and help. Still, he sighs and looks up at the ceiling of Bar Americain. In the floors above, he later tells me with no small measure of awe, “billions and billions of dollars” pass through the hands of the AXA Equitable Center’s tenants. It’s not hard to imagine at least one mayor who shares his pride in that fact.

Flay pauses, and seems to walk back three steps in his mind. “Listen,” he says with emphasis. “I hope he’s a great mayor. It seems like he’s gonna beat Lhota. Lhota’s not even putting up a fight.”

RELATED:
Anthony Bourdain On Why The Best Celebrity Chefs Just ‘Don’t Give A F*ck’
Bobby Flay’s Mom on From Scratch: ‘You’re Not a Diva Like the Rest of Them’ (VIDEO)
The People of Philadelphia Swear Fealty To Bobby Flay’s Burger Empire