Chris Cosentino's Mad4 Talk": 'Be Careful What You Wish For' 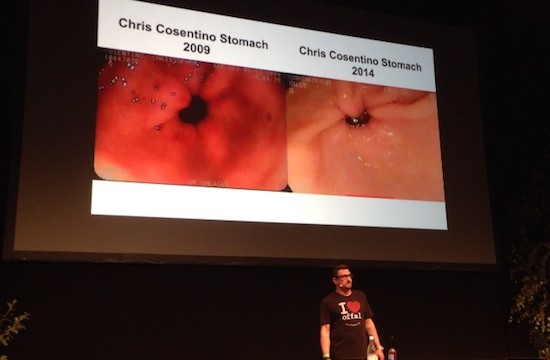 MAD4 took a big stand this year with its talks, what with announcing a major fast food concept from Roy Choi and Daniel Patterson, and especially putting San Francisco chef Chris Cosentino right before keynote speaker Albert Adria (which is pretty cool that it’s Albert Adria, amirite?). It’s also a big stance when Consentino blasts some truth about food TV and what fame really means.

We get our glimpses of his game-changing talk through Twitter, and of course Cosentino’s social media. (Cosentino wins nice guy of the year award from his Twitter).

“Honored to be speaking here at #mad4 I am fukin scared shitless.”


And then the truths came spilling out.

"Fame hurt. People thought I was a sellout chef and stopped coming to my restaurant." – Chris Cosentino, #MAD4

Chris Cosentino’s talk “Be Careful What You Wish For.” A food tv opportunity literally damaged his health. #MAD4

(Naturally, we then had to look up Cosentino’s TV history to see what this could have possibly referenced. He began on The Next Iron Chef in 2007, then he and Aaron Sanchez hosted the Food Network show Chefs Vs. City in 2009. This was all even before Top Chef madness!)

We catch glimpses of the things said to Consentino throughout his food TV career:

But at least the Wolverine thing worked out well for him!

.@offalchris about #tv cooking "you have really good sound bites. I fucking hate that. Why don't they say you have good technique" #MAD4

.@offalchris "I was ashamed & my heart just sunk" after seeing the effects of what his tv show on kids & society. #Bravery #MAD4

.@offalchris "Fame hurt…it's not what's it's cracked up to be" but why TV? "To tell the world to fuck off…and I let people down" #MAD4

Thoughts on competitiveness, follow-through, and being edited to be 'that guy' @offalchris #MAD4 pic.twitter.com/63LyLoodd1

Incredibly brave presentation by @offalchris #MAD4 sharing the dark side of TV fame. All the luck to him as he starts over, as he says

It’s not the first time Consentino has blasted his TV past. Back in 2012, Consentino told Food Republic that he didn’t want to encourage “food gorging” for his then 7-year old. Consentino also said his dream TV show (which he pitched over and over but never got greenlit) would be more of a Deadliest Catch-esque show, and one that explores where food actually comes from. That same year, Consentino won season four of Top Chef Masters.

The other big Consentino news is the recent closing of his 12-year old restaurant, Incanto, and replace it with a more fast-casual concept, Porcellino. Is this the new beginning for Cosentino? Looks like he’s already in the middle of a big transformation.

RELATED: Chris Cosentino Writes Issue Of Wolverine, Which Is Super Awesome
Chris Cosentino’s Dream Resto: ‘A Nun, A Family, A Plumber, A Lawyer & A Hooker All Sit Comfortably At The Bar’
Roy Choi to Go Into Fast-Food with Daniel Patterson (And The World Rejoices)