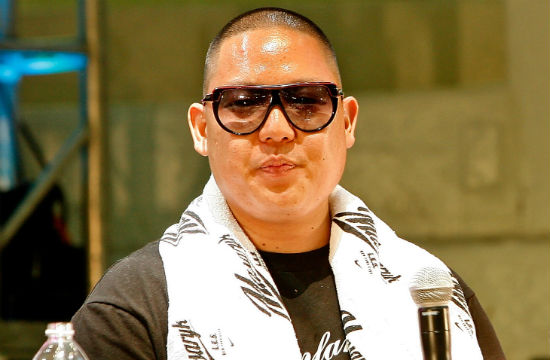 The more excerpts of Eddie Huang’s memoir Fresh Off the Boat that come out, the quicker it becomes our fine, fine crack cocaine, each fix just barely satiating us until the next morsel is released. In a feature titled “Reasons to Love New York” in the most recent issue of New York Magazine, an excerpt from FOTB lands on the list at #54 — under the heading “Because Some of Us Are Actually Glad Guy Fieri Is Here.”

In it, Eddie recalls his big break: his spot on Food Network’s Ultimate Recipe Showdown with Guy Fieri. After he lost the competition, Eddie infamously rejected the shit sandwich TV series the network offered him, and went rogue. But we had no idea how large a role the food world’s collective arch nemesis Guy Fieri played in Huang’s foray into culinary stardom — until now. Writes Eddie of that Ultimate Recipe Showdown shoot:

After we finished taping, people kept coming up wanting to try the skirt steak. The last one to come by was magenta Guy Fieri himself.

And despite the fact that I think Guy Fieri looks like a rodeo clown, I have to say he played a part in encouraging me to do this. I can’t cosign Tex-Mex sushi or wearing your sunglasses backward, but one time … he got it right. So, as I say this with a trash can under my head in case vomit involuntarily spews out of my eyes, “Thank you, Guy Fieri.”