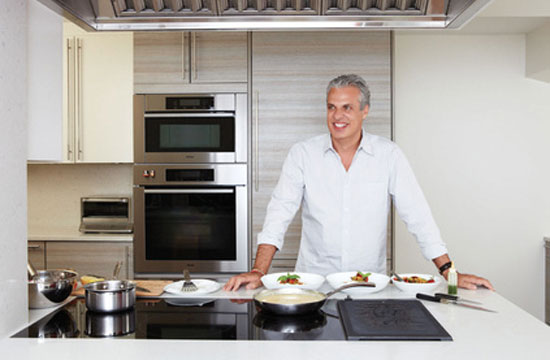 Months ago, Eric Ripert designed a kitchen for Poggenpohl — and, to the delight of unhappy hipsters everywhere, it was featured in this month’s Dwell magazine as an example of superior kitchen design. We caught up with him at a Dwell event in New York City, where he showed off exactly how awesome his kitchen is (which you can see here). However, we had bigger questions — particularly about the fish mislabeling scandal in the US…

The Braiser: I think I remember reading somewhere that you used feng shui in order to design the ideal kitchen for your own living situation.

Eric Ripert: Feng shui, yes. Feng shui, definitely. This is a kitchen that is designed, well it’s a beautiful kitchen as you can see, but it’s designed so that the person who is cooking can have everything very close to them. Therefore its no stress, you don’t have to move. It’s a kitchen that is very friendly, so that the person who is cooking can interact with people. As you can see, they can be all around here…they can be here. If you’re cooking you’re not even turning your back on your guests. Which in many kitchens, as you know, the kitchen is against the wall…

So, this is very practical. We basically pair practical aesthetic, thinking of friendliness and of a certain lifestyle of entertaining at home.

I’d love to  jump quickly to the fake fish scandal that’s everywhere in the news. I can safely assume that Le Bernardin does not ever…

[laughs] It does not.

…exactly. But I was curious as to why it is you think it’s so prevalent among the industry?

I can’t speak for other people but, what could happen is that, and I don’t know where they did the tests, if it was in restaurants or in supermarkets or…

I think it was everywhere.

If you’re somewhere and you don’t have any halibut anymore but you have codfish…maybe some people would be tempted to change the tag and say it’s halibut. I mean, it’s dishonest. I’m totally against it. But, there’s nothing I can do to prevent that, obviously. It’s common practice, yes. I read a story for the New York Times years ago, by Marian Burros, about wild salmon. They went to different places and analyzed the salmon, and all the fish were supposed to be wild, but most of the time they were farm raised. So, there are a lot of strange practices in the industry, it’s too bad.

Jumping off that story, could you personally tell if the fish you were being served was not what it says it is?

How, by taste or texture?

First of all, from the eyes. [Points at his eyes, then at an imaginary fish] I’ll get 70% of my answer, of my knowledge, by looking at the eyes. Then eating it, I would know exactly what it is.

I once saw Masaharu Morimoto touch fish and figure out which one was the freshest. Does that work, too?

Yeah, you can also tell that by the eyes. I mean, yes, if you touch a fish you can get some information, but also some fish sometimes come from warm water and are a bit softer than fish that come from cold water. So touching it is not necessarily… I mean, I’m not saying Morimoto is wrong. Obviously he’s a master at what he does, and I wouldn’t question him, but looking at it gives you a lot of information for sure.

And this is something you don’t need to be a three star Michelin chef in order to do?

No, I think if you have the habit of eating fish… a lot of people have the habit of going to the store and buying fruit, right? You wouldn’t mix up pears and apples, because you’ve seen them so many times. I guess if people were buying fish and eating fish so much, it would be the same way, the same recognition of “Oh this is an apple and this is a pear”. But when you don’t really have the experience of dealing with it on a daily basis, it’s more difficult of course.

Finally, we’re big fans of On The Table. When is the next episode and who are we seeing?