Ferran Adrià Goes A Beautiful Mind On Us: Drawings of Adrià’s Creative Process 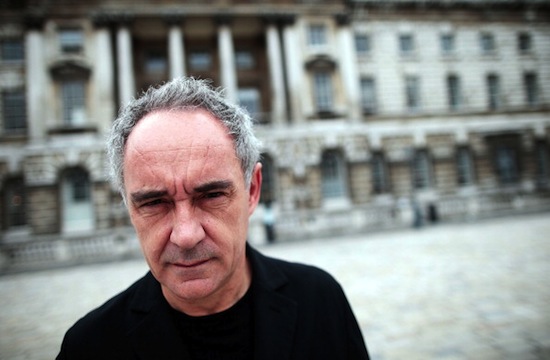 Remember that movie, A Beautiful Mind? (Russell Crowe, pre-before everyone judged him for not being able to sing in Les Mis?) Now we can’t stop picturing Ferran Adrià hunching over the world’s problems and drawing them out to a beautiful completion. (Or wait, what’s the movie where they’re mapping out physics problems on glass windows? Because that’s obviously the most practical place to do it? Never mind.)

Either way, getting a glimpse into Adrià’s beautiful mind (heh, heh) is quite astonishing — and New Yorkers will have just a chance to do that. Slate previews the newest exhibition at The Drawing Center in New York, featuring sketches and drawings from Adria and his team, opening January 25. And it’s evident just how much drawing and art took part in Adrià’s process. Said executive director of the Drawing Center, Brian Littman, to Slate, “Drawing is an analog for thinking … Visualization was the lingua franca [working language] of that kitchen.”

And yes, some of the drawings look a bit like Leonardo da Vinci’s graph paper sketches, like that plating diagram. And Adrià’s “creative pyramid” may be the E = mc2 of the culinary world. Are we overhyping this? Maybe. Still, the exhibit sounds pretty jaw-dropping, especially if you’re an Adrià fanatic:

The exhibition will also include architectural drawings and a model of the new elBulli Foundation headquarters, 3-D plasticine models that are used as a visual aid for chefs to faithfully reproduce individual dishes, 60 framed color drawings by the chef that explore his “theory of culinary evolution,” and drawings and prototypes from collaborations with graphic and industrial designers who helped to develop elBulli’s dishware, utensils, menus, and graphic identity and to codify the restaurant’s working methods.

Check out some of the sketches from Adrià et al. over at Slate.

RELATED:
Winning Projects from Hacking Bullipedia Imagines Cooking as Programming
From Our Friends: 9 Facts You Never Knew about Ferran Adrià and El Bulli
Ferran Adrià Wants Robert Downey, Jr. To Play Him In Biopic (Who Wouldn’t?)