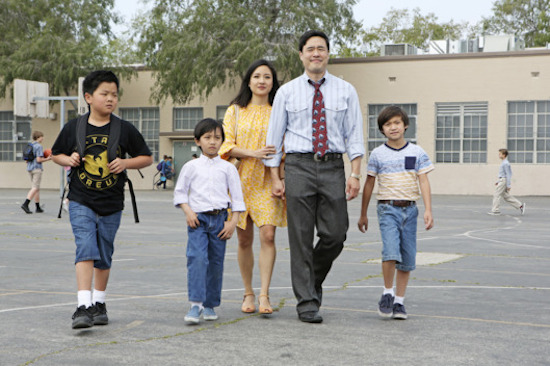 When I heard that Eddie Huang’s memoir was being made into an half-hour sitcom, I thought to myself, “How could they turn a seemingly acerbic and not altogether happy book into a comedy?” The chef went on a now-legendary rant about the show’s process and being “turned into a mascot for America.” Then ABC had that Twitter promo disaster. I knew I had to watch. It couldn’t be any worse than All-American Girl right? (Sorry Ms. Cho, it was bad.) ABC seems to be making an effort to represent more minorities and I wanted to keep that in my (open) mind as I sat down to watch the first episode.

Fresh Off the Boat follows 11-year-old Eddie (played by Hudson Yang), a hip-hop loving Tawainese-American kid trying to adjust to a new life with his immigrant parents. The family moves from Washington, D.C. to Orlando where his father opens Cattleman’s Ranch, a western themed steakhouse—let the hilarity ensue!

It opens with Eddie getting his hip-hop clothes on while hip-hop music plays and … how long do I give this to make me laugh? So far, little Eddie is rude and unlikeable. The voiceover — just kill me now.

Then we’re on a minivan ride from to Orlando with Mom, Dad, Grandma, brothers Emery and Evan, and Ace of Base on full blast. No one seems happy to be going except the “daughter we wished Evan had been.” Okay, that was funny. It only took three minutes, but maybe this show has promise.

Moving-in day, and the boys are looking at all their new, white neighbors and reminiscing that the only white people in D.C.’s Chinatown were lost tourists. Okay, I’ll give them that. I lived in D.C. for 7 years and never went to Chinatown. Then again, no one went downtown in D.C. after dark in the 90’s.

Already I like Constance Wu as Eddie’s mom, Jessica, for her dry sarcasm. She meets a gaggle of white neighbor mothers on skates on move-day, but I’m not sure who’s more the stereotype. The show seems to be walking a fine line (or is that comedy that I just don’t get?).

The family heads to their restaurant where grandma looks at a stuffed jack rabbit and says in Taiwanese, “You were too slow.” Another random Asian reference that’s only slightly stereotypical, but funny? We move on.

Suddenly it’s the next day, and kids are off to their first day of school. Eddie doesn’t want to go. There is something about “the eggs?” I think that means money? I’m confused. His mom tells him “Eggs are life; you came from my eggs.” Pure mother’s guilt, now that I get.

Eddie (surprise!) isn’t making many friends especially when he breaks out his “stanky lunch.” He can’t seem to bond with the white kids or the only other minority, an African-American kid whose “best friend is a 40-year old man.” Are we supposed to feel sad that Eddie isn’t making friends? Maybe it’s because he’s not likeable so far. Ugh, I’m halfway done and only mildly amused.

Eddie convinces his mom to get him “white people food” for school. Translation — Lunchables. They head to Food 4 All!!!, a typecast white-people store, where she can’t understand why they are so excited! Because you see they have all those exclamation points in their name, like this!! It’s funny!! Not really. While they are there she is offered free samples and takes the whole bowl. I laughed — I mean, who of us hasn’t wanted to do the same thing?

Meanwhile, the family restaurant has been empty, so Dad (Randall Park) hires a “nice happy white face, like Bill Pullman” to draw in customers. That leads to a commercial featuring a “burro who’s ready for his blocking.” I did laugh at the fake commercial in the closing credits.

It’s day #2 at school. Eddie gets in an argument when the other minority kid calls him a “chink.” I know it’s a true scene from Huang’s memoir, but it’s still an uncomfortably harsh moment for a sitcom. Is it the cathartic race relations joke we had been waiting for the entire episode? It seems a big issue to tackle and then wrap up in less than 3 minutes, in a series premiere no less, but that’s exactly what happens when his parents stand up for him. Voila, racism resolved! Whether or not Fresh Off the Boat will continue to tackle such weighty accounts of racism, as Huang does in his memoir, will be an interesting journey for all audiences alike.

In short, Fresh Off the Boat is shaping up to be a mish-mash of every ABC sitcom I’ve ever seen. I want to like it, but I also wanted to laugh more. Maybe I’m just being too harsh. Let’s see what episode 2 offers before I count down the days to cancellation.