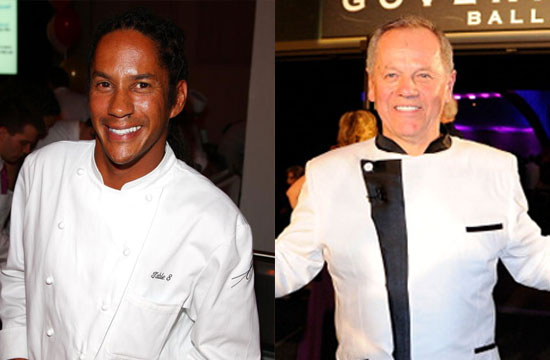 When it comes to kid chefs, there are two schools of thought: some believe that a young, pre-adolescent choosing to work in a kitchen is a true display of passion and commitment to the craft, while others cynically dismiss the phenomenon as a vehicle for the media to hover around a wunderkind because aww, look at the baby chef!

But did you know that Govind Armstrong, currently a famous adult chef, was once a child? (It’s true!) Currently operating two restaurants in California, Armstrong recently sat down with the Huffington Post and revealed that once upon a time, he was an adorable little 13-year-old kid who just really, really liked food. And his ability to cater his mother’s parties with stunning hors d’oeuvres was so well-known in Los Angeles that word of his precocity reached the ears of Wolfgang Puck:

At one of the parties that we had, the daughter of a friend of my mother’s was wondering who the caterer was. She really enjoyed the food, and went and told Wolfgang. He was like “Yeah, whatever, I don’t believe it. I want to meet this kid.” His whole thing was that kids in the States didn’t really get started at a young age as they did in Europe.

She picked me up and we went into Hollywood, and I took in this silly little book of recipes that I’d written and pictures I’d taken of food for my mom. I wore my best digs, church shoes and everything. And it was hysterical. From the moment I stepped foot in the kitchen through that back door, I’ll never forget it.

I went and talked to Wolfgang up in the office for a while, and then eventually he’s like, “I’d like to bring you on. I don’t know if you’re interested in doing an apprenticeship.” Which was not at all what I was expecting. I literally just wanted to see what was going on. And that was kind of the beginning.

Thankfully, Armstrong’s apprenticeship with Puck went unnoticed and he would up eventually working his way to a small burger empire. Had he decided to enter a celebrity chef’s kitchen at such a tender age these days, he would have probably gotten a book deal by 15, his own restaurant by 19, and his midlife crisis by 23.