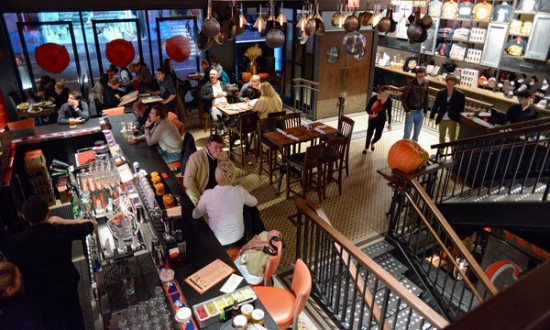 Are you ready for some awkwardness related to the Pete Wells review of Guy Fieri’s Times Square restaurant? Are you ready to hear it from Dr. Phil McGraw, of all people? Well, here goes: yesterday — the day that Wells’s review was officially printed — the New York Times reportedly held a party at Guy’s American Kitchen and Bar.

We’ll give you six seconds to get over that awkward cringe you’re feeling.

After Guy gave his defense on The TODAY Show, NBC brought in a panel of Professionals to discuss the matter further: Star Jones, Donny Deutsch, and Dr. Phil. In the clip below, the Doctor defended Fieri, opining that Wells’s piece was mean-spirited and self-serving, as well as harmful to the staff of that restaurant.

“And by the way,” he added, “last night, they hosted — the New York Times hosted a 160-person party at that restaurant.”

An employee at Guy’s American Kitchen and Bar confirmed that the Times held a party there last night, with an estimated “150 to 160” people attending. We’ve reached out to the New York Times and will update if we hear anything.

UPDATE: A representative from The New York Times emailed us this response:

As far as I’m aware, The New York Times did not host a company-sponsored event at Guy Fieri’s American Bar and Grill. However, our offices are located in the Times Square area, near the restaurant. We have many employees who could have dined there. That is not something I can confirm for you.

UPDATE #2: A publicist for Guy’s American Kitchen and Bar confirmed to us that the New York Times party did occur.

UPDATE #3: The New York Times now confirms the event: “The Times ad sales department hosted an event for clients at the restaurant last night. The event was planned two months ago.”