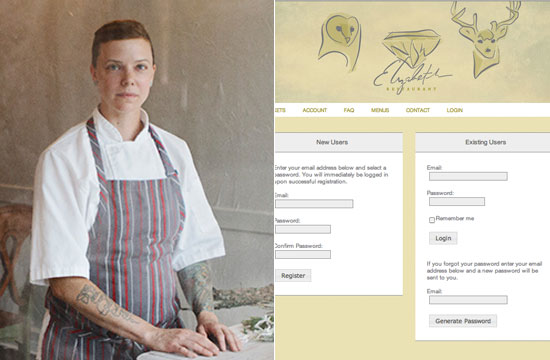 Nick Kokonas and Grant Achatz’s notorious online booking system has (with few exceptions) been working tremendously well for them, helping NEXT and Alinea cut down on food waste by knowing exactly how many covers they’re expected to serve over the course of a week. So far, they’ve only shared the proprietary system with Daniel Humm’s NoMad in New York City, but a relative Chicago newcomer has finally been allowed into the secret inner circle, and her name is Iliana Regan.

Kokonas tells The Chicago Reader that he offered the system to Regan and her new restaurant Elizabeth because he was impressed with her restaurant’s concept: “She’s very talented, and she’s putting together something very unique,” he said. “If you have an innovative system that you’re trying to roll out to the public, you want to be associated with other innovative people and businesses.”

But he probably also offered it because Regan, known for foraging and cooking complex, multi-course meals out of her apartment kitchen, is so ridiculously meticulous about not wasting anything — anything — when she cooks:

One weekend this spring she had three dinners in a row with 12 people at each one and 25 courses apiece. She knew exactly what she needed to buy, and on Sunday evening all that was left in her refrigerator were a couple carrot tops, three pieces of Swiss chard, and a Ziploc baggie of arugula, she says. “I freak out when there’s leftovers in the refrigerator. It’s an OCD thing of mine. I have to figure out how to eat this thing that is leftover because I don’t want to waste it.”

A revolutionary new booking system which penalizes no-shows, or a tool to help freakishly detail-oriented chefs manage their OCD? Whatever it is, it seems to work well for Regan, as seen below. (Also, she sounds like a cross between Achatz and Marcel the Shell, which is adorrrrrrable.)