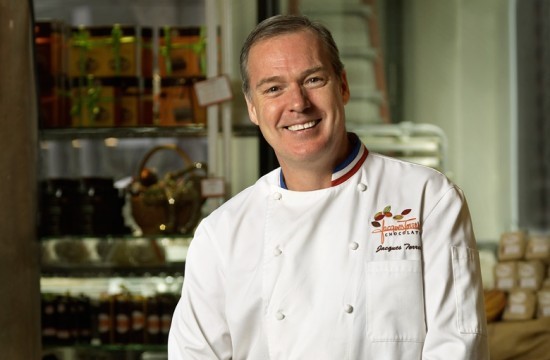 Jacques Torres is hard to keep up with.

He bounds out of the back room to greet me enthusiastically, and pulls me behind the counter of his Soho shop. He throws on his chef’s jacket — a custom one, with his name embroidered on the lapel and an MOF ribbon around the collar — in the laundry room and, digging around, finds one for me too. (It’s a large, which I swim embarrassingly in.) He pulls out hairnets from a dispenser next to the washing machine and gaily informs me, as I jam locks of hair into it, that we both look sexy (“I’m sexy and I know it!” he sings, shaking his hips in a groove thang way).

And with a flourish, he beckons me through a room with spinning vessels of liquid cocoas, brown and orange and red, into a separate, cooler room with hardened Halloween chocolates lining the shelves, where he tells a worker named Maria that she looks particularly beautiful today.

I am determined to get as much of an interview out of Jacques as possible, but he insists – strongly — on teaching me how to make a chocolate sculpture; in this case, a Halloween cat designed by a former Disney animator. And when you’re being swept up in Jacques’ infectious ways — his constant whistling, his manic charm — you somehow end up baffled and happy, and surprisingly full of sweets. Is Jacques Torres a French chocolatier with a devious bent, who calls his publicist “Hand Cuff” for entirely the wrong reasons? Is he a civilized Willy Wonka who enjoys mundane activities like fishing? I leave that to you to decide, dear reader — because I certainly couldn’t.

They still don’t have Halloween in France, do they?

I still don’t understand that holiday. I don’t get it. You have to be born in this country, because how do you put the kids in something scary?

And then you give them chocolate afterwards.

And then you give them candy? I mean, Santa’s a nice guy. “Have you been good? Yes? Okay!” Dah dah dah. You sit the little girl on his lap. I mean, I understand Christmas, and I understand Easter. But Halloween is one of those things where, if you don’t grow with it? The French, they tried Halloween for a few years and I think they’re dropping it. For the last ten years, they try every year. It’s not part of the culture, and it hasn’t taken off, and the people agree! “Why do we scare the kids?”

So in which holiday do you sell the most chocolate?

It’s very interesting, because the females come before they guys, they know what they want. Males, they come in the last half hour and they don’t know what they want. They have a price in their mind. That’s it. And the price is in direct relation to how much trouble they are in.  Fifty dollars, eighty dollars, a hundred dollars. Twenty dollars guarantees trouble. What do you want, sir? “SOMETHING.” [shrugs] So now we have bags ready for those. It’s funny, the line goes around the whole counter, does an S, and then comes back around.

What’s the worst thing you’ve ever seen someone do to chocolate?

Not eating it. That’s bad.

Or someone who’s tried to make something with chocolate and failed?

Ohhh, you have no idea. In order to succeed, you have to fail, no? You ride a bicycle, you fail, you try a few times, you succeed. So we have a lot of failures in here.

So what’s your Halloween costume?

Oh my god, please tell me you have someone who will dress up as SkyBlu.

I’ll get Ashley [the barista making whipped cream] to do it. Ashley!

[His publicist explains that once, Jacques was commissioned to make a giant chocolate sculpture of Redfoo, possibly explaining his love of the Party Rock.]

You know, I used to like Lady Gaga. I still love her. But what I like about LMFAO is that they’re completely outside of the box, they’re completely different. They’re not ridiculous, but they are not afraid of it. And also, it’s a certain type of artistry. I think Lady Gaga is a real artist in what she does, because the way she dresses and the things she does. I think those two, they are probably opposite, but I think they’re both artists in their way. That’s why I like them. They’re funny.

Have you seen the Korean guy?

How do you keep yourself different and growing as a chocolatier?

It’s difficult, you know, because in what we do, to be different, you have to be careful, because the people need to recognize themselves into the products you make, because otherwise you don’t buy it. For instance, making a cat in chocolate for Halloween? I never see it. Even the way we sell chocolate, we try to be very casual. In France, it’s very serious, it’s very cold. It’s a little bit snob, because of the quality. And we don’t want to do that. We want this place to be fun, friendly with the customers, and even if we’re selling a serious product, we try to be very casual and fun.

Are there any chocolate trends you think should cross over from Europe to the States? I mean, there was that aerated chocolate bar Hershey’s tried to do. They love that in England. Did not go over so well over here.

Hm. I don’t know. I’ll have to think about it. What holidays do they have over there? On April 1st, when you play jokes on people, you put the fish on their backs…paper fish that you tape on their backs. And then we sell the fishy chocolates here.

And then you put it on their backs?

No. We make them eat.

[We giggle, then he runs over to his counter and grabs an overwhelming assortment of cookies and pastries for me to try. “I’m the chef; I can do this,” he assures some customers, who nod at his whites.]

Is it just your job to make people fat?

So back to what you were saying earlier: why are French choclatiers so serious?

I’m not completely French either, so that may be why. It’s a question of culture, maybe. And also, they want to be taken seriously.

[One of Jacques’ neighbors wanders in to talk to him briefly. I soon learn that she lives next to his houseboat on the marina, and that in a few days, they will have to put their dog down. “Dogs are like family,” Jacques says sadly, noting that his friends are devastated. The topic soon turns to his houseboat, and how he’d always wanted one for fishing]

It’s a kid thing, you know. I was always saying that I want a boat, and I was training one year for the marathon on the West Side, and I passed in front of the 79th Street Boat Basin, and I saw a houseboat. I was thinking that I’m going to buy a houseboat, so I hire an agent, I start to buy magazines, I look at them, and then the agent that I hired said “Jacques, I’m not going to sell you a houseboat. I’m going to find you a motorboat.” It’s 40 feet, and it’s a nice boat. It’s got two cabins, two bathrooms, it’s nice enough to be in it and I love it. It’s quiet. That’s what I love, it’s quiet…Sunday, I think I’m going fishing, for sea bass. You want to see the picture? A friend of mine, he sent me some, of something called an eating frenzy.

[He bolts for his Macbook, and pulls up some emails from his doctor friends/fishing buddies. His publicist explains that Jacques fishes every weekend that his wife is running her own chocolate business on the West Coast. I quietly munch on my canele, taking it all in.]

Those are the fish there. And it’s crazy, because those are big fish. They are here in the harbor in New York. Look at them. That’s when they go after smaller fish. [clicks to the next photo] That’s where the rod is bending when we catch them, because we use relatively small rods to catch these fish. [clicks to the next photo, with an oddly familiar person holding a fish] That’s an albacore. That’s the one that the fish are eating.

Yeah, they were actually on Tom Colicchio’s boat that day. He loves fishing. I actually talk to him on the radio when I go out, I radio to see if he’s there, because he loves fishing and I love fishing too. [points back to the screen] Those striped bass you see there? They are feeding…and everybody try to cast in it.  Look at how beautiful they are.

[FLASH FORWARD TO THE FACTORY, WHERE WE ARE ALL BACK IN HAIR NETS AND JACQUES IS WHACKING SOME LEGO CHOCOLATES OUT OF A MOLD.]

Random question: who are some younger chocolatiers that you think have a bright future?

I think there is a lot of talented people. You look at New York: I always buy chocolate boxes from other people, and some of them are really nice. Names, or no-names. I was at Mariebelle Chocolates — I was with my [sous-chef] and we went to a Japanese restaurant next door, so we went to her store, and it’s nice what she has. It’s beautiful, the packaging is beautiful. So I call Mariebelle down. I tell the sales lady: “Can you call Mariebelle, please?” She says: “I dunno if she’s here. What is your name?” I tell her Jacques Torres is here. And then she runs!  [laughs] That was very funny.

Instructions for making a chocolate mold, as well as more Jacques Torres non sequitirs, are below.