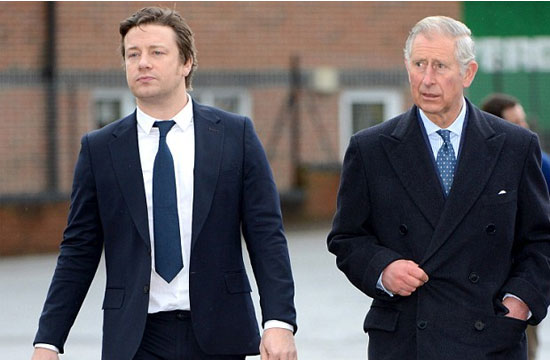 We’re not too caught up on our British common law, but we’re sure that people used to be punished quite severely if they were to call any members of the Royal Family “hippies.” Good thing we live in the 21st century, because otherwise Jamie Oliver would be totally dead meat after calling Prince Charles a “hippie” for owning a pet pig.

To be fair, Prince Charles did walk right into that one: during a joint visit to the Carshalton Boys Sports College in South London, where Oliver and the administration had encouraged its students to grow their own produce for lunch, the Prince of Wales, a longtime advocate of sustainable farming and healthy eating, applauded the school’s initiative (which resulted in soaring exam grades). After an awkward lunch where they pretended to be cafeteria ladies for a bit, the Prince, according to the Daily Mail, “suggested every family should have a pet pig to combat allergies.”

Though he was subsequently knighted Prince Charles’s Royally-Designated Biffle, Oliver couldn’t contain himself when he spoke immediately afterwards: “I may say, at some stages possibly the royal family might have thought you were getting to be a little bit of a hippie and that may be true, sir.”

“I told Prince Charles he is a hippie for keeping a pet pig,” he jokingly elaborated later. “I’m going to get shot for saying that.”

No reports have clarified yet whether avid dog-owner Prince Charles does indeed own a widdle hypoallergenic piggie, though if he does, we bet that it’s a little teacup piglet who makes the Royal Corgis feel awkward about attacking it.

As of this post, Jamie Oliver has not been shot; we’ll keep you updated on that story as it develops.

[The Daily Mail via Eater]