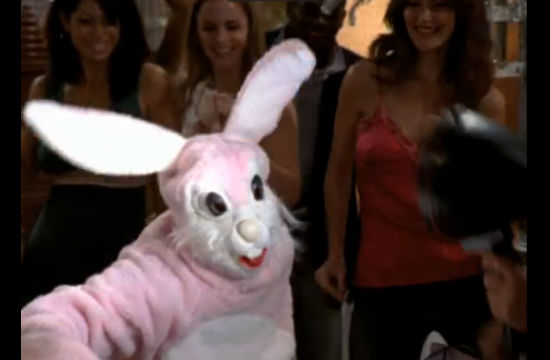 On this week’s Kitchen Confidential, we see Nolita on its best-performing weekend since it opened. Jack Bourdain (Bradley Cooper) is killing it with the ladies, Seth (Nicholas Brendon) is attempting to coerce Teddy (John Cho) into betting on horses with him, and Pino (Frank Langella) is delivering hearty Italian man-kisses all around. Then, just as Jack saunters out into the dining room to bask in the quiet of happily face-stuffing patrons, we discover the real reason behind the silent dining room — Nolita is being robbed.

While the bad guys are looting the wealthy patrons, Jim (John Francis Daly) is in the back saving Teddy’s life from the armed gunmen. The next morning, The Fictional TV Universe Version Of The New York Post puts out a story doubting whether the resto will ever recover, but Jack gives one of his legendary speeches about how New Yorkers are the toughest around and reminds everyone that they’re totally booked for the evening. Jim weeps as if Obama himself is delivering a speech before him, because, as we all know, every time Jack Bourdain speaks, an angel has an orgasm. Tanya (Jamie King) quietly points out that all the reservations in the book have been canceled, but Jack refuses to throw in the towel.

To get some good press back in his life, Jack decides to invite a brassy, 6-time divorcee, closeted lesbian gossip columnist to a comped meal to get a plug. Meanwhile, while she’s spanking, flirting, and bollocking her way to foodie heaven, Teddy is in the back desperately trying to clear the debt he feels he owes Jim for saving his life. The only thing Jim wants? Fugu lessons, AKA, the noble, secretive, and illegal art of cooking deadly blowfish. Teddy attempts to shut it down, but Jim insists it’s the only thing he wants. Predictably, he passes out at his first lesson.

Sadly, Jack’s luck has yet to turn. A construction crew that has begun digging right outside Nolita hits a sewer line and the restaurant is flooded with less-than-pleasant odors. The gossip columnist bolts. Jack’s next move is to peddle the resto’s food on the streets to try and draw in customers. Uhh, it works on Restaurant Impossible? Yeah, we’ll go with that.

When that brilliant marketing tactic fails, Jack calls in the cavalry for assistance. Unfortunately, in this case, the cavalry is Steven (Owain Yeoman) and Tanya. Their proposed solution: model night. Yes, a once a week event in which models can schmooze with other models and meet agents and “network.” Who exactly will be eating the food, we don’t know, but we assume that just means less expenses for the kitchen.

Of course, Jack is supremely offended when the models finally do get drunk enough to eat and then queue up in long lines at the bathroom to return their purchases, as Mimi (Bonnie Somerville) so delicately puts it. The final straw? Party Bunny’s arrival. Party Bunny is a hip and slightly ironic dancing adult in a pink bunny suit who acts as a sort-of mascot and follows the models around. Jack gives up.

Pino steps in just as his executive chef is at the height of his sulking, and reminds him that men make their own luck. So, Jack storms out into the dining room, punches Party Bunny in his pwecious widdle wabbit nose and expels every model who’s expelling his perfect risotto. The next night, Nolita has but three sad tables of patrons, but word of the Party Bunny incident is spreading and reservations begin coming in once more out of respect for Jack’s integrity. Thank you, wise Pino, for stepping in and reminding us that moping isn’t the answer, and that upon non-mopers, Jesus bestows blessed miracles. Or something.

Check out the episode in full below!