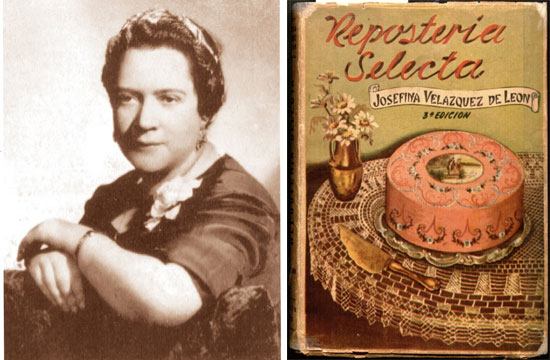 Today’s member of the Lady Chef Stampede is a woman who was more of a home cook than anything else, but as a home cook she invented a national cuisine. Everyone who cooks Mexican food, from Diana Kennedy to Rick Bayless, are all unequivocal in their assessment: we owe it all to Josefina Velazquez de Leon.

Born in 1899 in the state of Aguascalientes, Josefina was well off until her family’s land was confiscated in the Mexican Revolution. One year later, her father died of a heart attack. A few years after that, Josefina’s husband of 11 months died suddenly. She never remarried and never had children. Instead, she realized one thing, “Knowing how to cook is the basis of economy.” With no professional training (everything she learned about cooking she learned from her mother) she began to write cooking columns for magazines. Her straightforward style won her fans and with “Knowing how to cook is the basis of economy” serving as its motto she opened her Academia de Cocina Velazquez de Leon sometime in the 1930’s. She started out cooking continental cuisine (with a special focus on making sugar figurines, which are still a big part of Mexican culture) but before long she was focused solely on Mexican food. And sugar figurines.

Most cooking at the time concentrated on European recipes, with Mexican regional foods usually lumped into an “Indigenous” section in the back of cookbooks. But Josefina’s classes tapped into a hunger among Mexican women to learn how to cook “real” Mexican food. Soon she had to rent a second space to deal with the overflow, and shortly after that she began to go on the road, attracting up to 100 women at a time to her touring classes.

Not content to let someone else make money off her hard work, she brought her two younger sisters on as employees, and opened her own publishing imprint (Ediciones Josefina Velazquez de Leon) in 1937 to publish her cookbooks. She also began publishing catalogues where women could order food and cookware from her, making her mail order business a one-stop shopping solution where women could buy everything they needed to make their own sugar figurines, regional Mexican food, or anything else they could imagine in the kitchen. She even had a monthly magazine, The Art of Cooking, that ran for about ten years. Eventually she would publish 140 cookbooks, and host cooking shows on the radio and on TV.

Before the 1940’s, Mexican cooking wasn’t a unified cuisine, it was just a formless mass of many, many regional recipes, each of them a mystery to each other, separated by distance and tradition. But in the early 1940’s, Josefina began to tour Mexico to gather recipes from all the regions. Her goal was to unite Mexican cooking as one cuisine, not a bunch of regional cuisines that all happened to be next to one another. She would arrive in town and, working with local church groups, arrange to teach a few classes. Women could attend for free, and they were encouraged to bring family recipes and prepare famous local dishes. They understood that Josefina might use their contributions in her cookbooks, but they, in turn, were taught regional specialties from other parts of Mexico. The result of her first trip was Regional Dishes of the Mexican Republic (1946) which was the first cookbook to present all of Mexico’s regional cuisines between two covers. In a nod to all of us living north of the border, she published the bi-lingual Mexican Cookbook Devoted to American Homes in 1947.

As Rick Bayless says, “She gave a national face to regional Mexican cuisine. She carried a banner that said, ‘We’re all Mexican: Veracruz Mexican, Oaxacan Mexican, Yucatecan Mexican.'” Which makes her final fate even more tragic.

After returning from a trip to Veracruz in 1968, Josefina fell ill and died. Her sisters tried to keep the business going, but without her presence they couldn’t do it. Less than a year later they closed the publishing house and then her school. No one’s sure why they did it, but on the school’s last day they took everything – every knife, every whisk, every plate, every table – and put it all out on the sidewalk where passing strangers could take them. By nightfall, nothing was left. Today,  the building that housed Mexico’s most important cooking school is an auto supply shop, and there’s a massage parlor around back. There is not a single trace of Josefina Velazquez de Leon.

Previously in this series: On The Keeper Of South Carolina’s Culinary Heritage