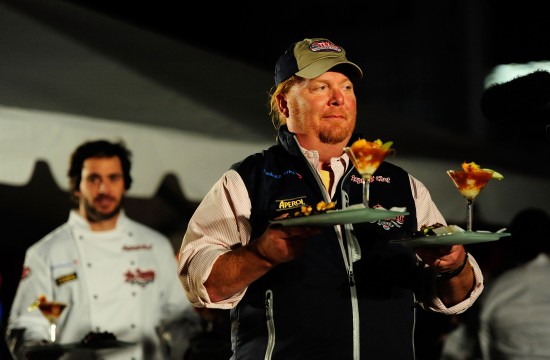 Last week at the Atlantic Food Conference, Mario Batali had some advice to any young chef graduating from culinary school in 2012: don’t think that television is the golden ticket to success as a restauranteur.

“All the people who lose in the first three or four rounds of all of these sadistic shows don’t go home to a crowded restaurant,” he said. “TV isn’t necessarily the guarantee.”

His live interview, which took place with Atlantic editor and James Beard Award-winning writer Corby Kummer, focused on the concept of celebrity chefs, both as a phenomenon within the restaurant industry, and as someone it happened to personally. While he acknowledged that he’d been incredibly lucky to catch a paradigm shift viewing chefs as artists — at the beginning of his career in the early 80’s, “anybody could be a cook, just like anybody could mow the lawn” — he doubts that it could be that simple anymore. “I can teach a chimp how to make linguini and clams,” he said, speaking about the intangibles separating the great chefs from the average chefs. “I can’t teach a chimp to dream about it and think about how great it is.”

Even a degree from somewhere as prestigious as the Culinary Institute of America won’t get you further than a position as a line cook straight out of college, said Batali, concerned that schools had convinced students that they’d become instantaneous Food Network stars or executive chefs upon graduation. “We don’t even hire sous chefs. We hire linemen. No one is ever hired to be the boss.”

Ultimately, Batali, who called himself “foolish” and “impatient” at that tender age (he impetuously decided to drop out of culinary school after surviving Marco Pierre White’s kitchen), had one major piece of advice: “I would recommend that whatever you do, whatever you start, you should finish it.”