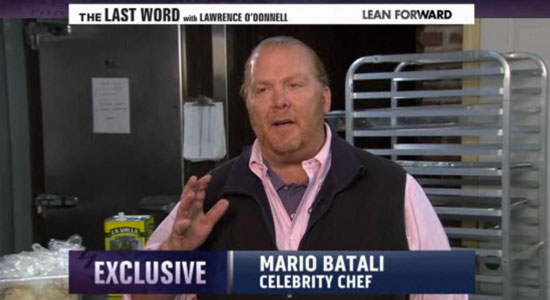 Winding down his media blitz from the Food Stamp Challenge, Mario Batali appeared on last night’s The Last Word With Lawrence O’Donnell to defend his decision to feed his family of four on a food stamp budget, which is to say: $31 dollars per person per week, which breaks down to $1.48 per meal.

His biggest lesson? “Shopping at more than one store was the key to understanding it,” Batali said to his disciple O’Donnell, live from the kitchen of Babbo (which I am surprised can handle a live media feed, unless there’s also a secret green screen room at Babbo).

“Often these restaurants have to manipulate their own supply and demand, and have sales when they’re trying to move something quickly. So we were lucky enough, living in New York, to go to four different stores. But I know that there are food deserts, places where it’s more difficult to find food, that would make this a lot more difficult to achieve.

“So at that point you have to allow the store to dictate what your menu is by buying what’s on special this week. Which may not be chicken breasts, but chicken legs…so it’s understanding it in a different way.”

Batali’s grand experiment, designed to raise awareness to a proposal in Congress to cut food stamp budgets, was greeted by jeers from Fox earlier this week. Was this a rabid publicity stunt, readers, or a celebrity chef using his star power in a good way for a greater purpose?  Let’s comment it up.