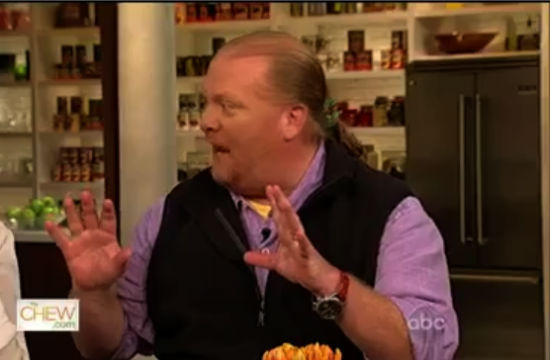 In case you hadn’t heard, the USDA has decided to revamp the Uniform Retail Meat Identification Standards (URMIS) in an effort to help consumers better understand the cuts of meat they’re purchasing. Of course, the new names are every bit as confusing as the old ones, with arbitrary city names in the place of any sort of anatomical identifier (e.g., “Boston roast”…WTF is that?). The Chew tackled the issue on its broadcast today and Mario Batali, for one, was shocked and appalled by these newfangled monikers. Said Batali:

“It’s very much like all of a sudden, people who have been listening to Led Zeppelin all their lives now have to listen to Kanye. It’s like a non-Twitter universe trying to figure out what they’re talking about on Twitter, just because the hipsters at the USDA decided to change the vocabulary. It’s gonna be a big jump in the country. It’s going to be very difficult for people to figure it out.”

Damn those meddlesome hipsters! Sure, the renaming is dumb. But also, how many people know that what’s currently labeled as “pork butt” is actually pork shoulder? Moral of the story, from the good book of Chris Cosentino: visit your butcher instead of buying plastic-wrapped meat on a styrofoam tray.

Check out Batali’s mini-rant below.

Bonus clip: check out this uncomfortably S&M-themed innuendo exchange between Mario Batali and Ina Garten, which sort of leads us to believe that Mario is both a canny and skilled lover? We hate ourselves.