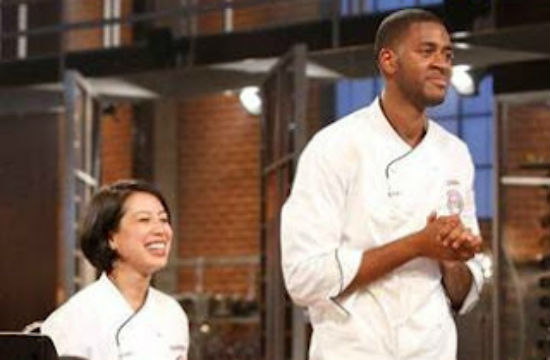 We got the chance to sit in on a round table interview with MasterChef finalists Josh Marks and Christine Ha recently, and they dished on everything from what cooking help the home cooks really get behind the scenes, to how the judges treated them, to their most feared mystery box challenge, and, of course, how Christine’s blindness defined this season’s competition.

While the shooting schedule for MasterChef may not be quite as grueling as the 20-hour days for four weeks straight the Top Chef contestants must endure, they are shooting six days a week for eleven weeks (and yes, Joe Bastianich, Gordon Ramsay, and Graham Elliot stick around that whole time).

Says Josh, “We cook every single day except Sunday. On Sunday we either have free time in the kitchen or in a cooking class.”

Wait, what now? You read correctly: cooking class. We were wondering how two non-bakers with no culinary training made three souffles in 60 minutes. As it turns out, the MasterChef-testants do get a bit of training behind the scenes, and everyone has access to “a full library of pretty much every cookbook in the world” between challenges to study. But no one has any prior knowledge of what the challenges will be, no one gets to consult the library during challenges, and the cooking classes aren’t necessarily specifically tailored to that week’s challenges.

Check out the Q & A we sat in on below to learn more about the cooking classes, how Christine felt being “the favorite,” and a big hint about tonight’s finale.

Can you elaborate a little bit more on [the cooking class], and what kind of recipes do you guys have access to during the competition?

Josh: The cooking class is like, so MasterChef, they really teach you how to be a chef. You’re not just on there cooking all willy nilly, so they’re teaching us baking component classes, where they teach us how to make pastry cream, sponge cake, cobbler, shortbread and pie crusts, etc. But they don’t necessarily show us how to assemble an apple pie and make a pie, but they show us how to make the crust. You know what I’m saying?

How difficult was that final challenge perhaps even more so than you maybe expected ahead of time?

The Braiser: Christine, one of the great things about MasterChef is that we get to see this softer, more encouraging side of Gordon Ramsay, which is great. He seems to have taken a shine to you, and deservedly so, but do you think he played favorites with you at all?

Christine: I don’t feel like it, because there have definitely been times when Chef Ramsay would tell me that my food didn’t taste good at all, or he’s cursed at me before in the kitchen, so I don’t feel like he was playing favorites.

The Braiser: Josh, can you define your cooking style for us? Because you have this very down home southern appeal; you went to school in Mississippi, but you utilize Indian flavors, which kind of comes out of nowhere. You’re obviously really deft with those kinds of spices.

Christine, throughout the competition competing with your disability, you’ve been an inspiration to not just your fellow contestants, but the judges and people watching at home. You have to be really proud of yourself, but it also must be a lot of pressure. Has it made it more difficult than it already was having people putting you on a pedestal and looking at you like that?

Christine: That’s actually a really great question, because I do feel like those sometimes are my sentiments exactly. I think the higher people put me on a pedestal, I think obviously the longer the height I have to fall. So it’s a little bit scary being such a role model.

When I meet people in the street who come up to me and tell me that I’ve been an inspiration, I really am just myself, and I just want people to know that I’m human and nobody is perfect. I am who I am and so I think that’s important to me that I’m really myself, and I keep that integrity. Because it’s great to be an inspiration, but I think at the same time, I try to keep it real. But I do think that people appreciate that as well, that side of me that I’m honest and I try to be as authentic as possible.

Josh: Just to add to that, Christine definitely does keep it real.

What was the one ingredient for both of you that neither one of you were looking to see in a mystery box?

Josh: Oh, tofu, I was saying the whole season, I’m like, Lord, please don’t let it be tofu or vegetarian, because I’m screwed.

Christine: I know, that’s what is hilarious because there’s several times when we were asked what we’re hoping to see in the mystery box, and I kept saying tofu, because I knew Josh wouldn’t it want it to be tofu. I can cook with tofu, so it’s funny that that’s what I kept saying I wanted. But I think for me I don’t know…I mean I think like I would welcome all sorts of those things, but I think like something I don’t know that’s really crazy out of the box, like horsemeat, like they eat in Japan. I think wouldn’t know what to do with that, so that’s probably something I would hope that I wouldn’t see in a mystery box.

Tune in to the MasterChef finale tonight at 9pm on Fox.

(This interview has been edited and condensed.)