Art Smith to Give Disneyworld Tickets at 101 Gay Weddings

Not Only Will Chef Art Smith Host 101 Gay Weddings At SOBEWFF, He’s Giving Them Disneyland Tickets, Too (UPDATED) 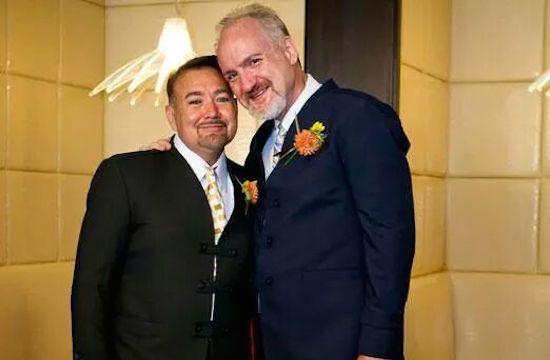 And the chef’s reason for giving all of the 101 gay couples getting married at South Beach Food & Wine Festival tix to D-World is truly lovely.

Last month, we broke the news that our superhuman chef friend, Art Smith, would take it upon himself to marry 101 couples at SOBEWFF, in response to Florida’s attack on gay marriage rights. The wedding blowout, hosted by Smith, Duff Goldman, and Ted Allen, is pretty spectacular in itself. We’ve got akes catered by Goldman, 12 top chefs from Miami cooking, weddings ordained by a celebrity chef-slash-ordained minister, and a giant after-party with proceeds given back to local LBGT organizations, with DJ Chi Chi Larue and Tracy Young (both of whom Smith calls “iconic music makers of LBGT America”). Now, Smith has told The Braiser that he’s adding on a very special surprise for his 101 newlyweds: tickets to Disneyworld.

I learned from Oprah.Iam giving away tickets to all the newly weds to my favorite place on earth.Lots more to come #101GayWeddings #SOBEWFF

Smith says that Disney is one of the first, and only, worldwide company to accept LBGT customers with open arms (despite crazy right-wing conservatives’ protests). He explained why he chose to give away Disneyworld tix to us via Twitter messages:

As a fun honeymoon gift I am giving all the couples from 101 Gay Weddings tickets to Walt Disney World. My favorite place on earth.

My first job The Magic Kingdom College Program that I felt comfortable being gay in 1980.

They have and will always be the leader in the world for support to the LGBT community. I was loved embraced as a young chef.

I was bullied by Chefs at other places which led me to become a personal chef. I pride myself from what I learned at Disney is practiced … at my restaurants across America. The mouse has a beautiful heart.

Now that is what we call a perfect wedding gift.

*Update: Smith tells us that he too will be renewing his vows during the 101 gay weddings bonanaza! “We are marrying as many people as possible,” Smith says, in light of the Supreme Court decision on marriage equality coming soon.