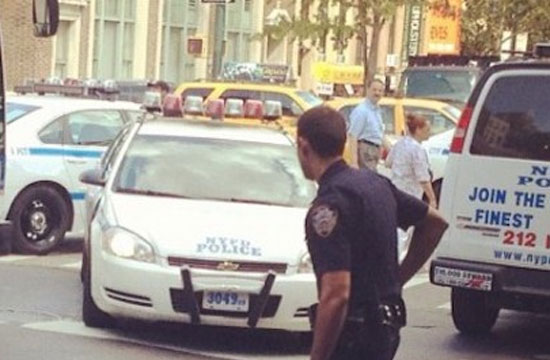 Eddie Huang passes along this horrifying story via the New York Observer, in which a policeman outside of his restaurant Baohaus shot and killed a dog in the middle of the street, in broad daylight. Huang relayed his account back to the Observer, along with extremely graphic pictures:

We heard the gunshot, and we all ducked, and saw people running and screaming. All of the sudden, our chef Mitch ran towards the gunshot. He was like Yo, it’s that dog in front of KFC—because there’s always this dog in front of KFC—and by the time I get there, I can see the dog whipping around and convulsing.

Everyone around was like: Put the dog out of its misery. The cops left this dog wiggling and flaying, blood coming out of its mouth. They shot it in front of a public bus.

Another one of our employees was ten feet away from it, and he said what happened was: The cops tried to mace the dog, when they tried to mace it, the dog lunged at [the cop]. And this is the same homeless guy we see outside of KFC every day. He never bothers anybody. Today, the guy was passed out. Other people were saying he OD’d or whatever, but he was alive, he was just in a hole [passed out].

You can read Huang’s full report at The Observer, though we’ll take this opportunity to warn you that the accompanying image is graphic and probably NSF-dog lovers.