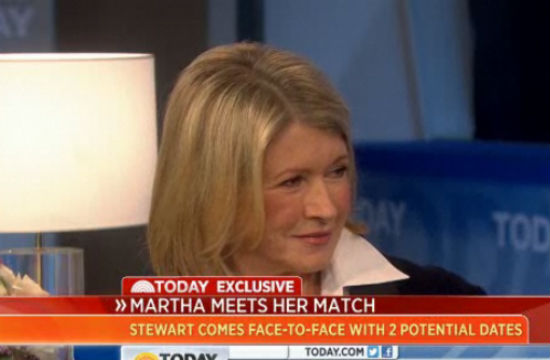 While we admire Martha Stewart for her commendable skill of Always Looking Like She’s Got Her Life Tied Up In a Beautiful, Sage-Green Gingham Ribbon, this long-form Vanity Fair profile shatters our hopes and expectations of the mogul, suggesting that all the cool things that Martha Stewart did in the past few months — confess things about her sex life, join Match.com, admit to smoking the reefer, chill with Andy Cohen — might actually be “an attempt to pull in younger followers, a new generation of M.S.L.O. consumers,” rather than Martha just kickin’ back in her retirement age.

According to numerous business executives interviewed for the profile, which covers the corporation’s decline and subsequent lawsuit with Macy’s, Stewart’s company has continually lost money since 2002 (“with the exception of one year — 2007, when she had a particularly large payment from Kmart”), and the Macy’s lawsuit only added more complications:

Whichever way it goes, however, it will not be the end of Stewart’s troubles. Some are related to severe problems across the entire print-media and broadcasting businesses, but others have to do with Stewart herself…Some suggest that there has already been an attempt at discipline at M.S.L.O.: the cost-cutting last year; the fact that Stewart’s compensation inched down in 2012—to $5.2 million—and was cut yet again in July. Her board has long been considered a compliant one—but that could change, too, with the recent addition of two J. C. Penney executives.

The mini sex confessions are seen by some as an attempt to pull in younger followers, a new generation of M.S.L.O. consumers. And perhaps the dating game is pitched to her core consumers and most loyal devotees: women, particularly older ones. Indeed, following Stewart’s public manhunt, Match.com reported an upsurge in older women signing up for its service.

Other things we learned that may be slightly redeeming, however: Martha Stewart is responsible for white towels being available in big box stores like Wal-Mart and Target, because executives used to think poor people were dirtier, really:

“Formerly, at mass market, everything was navy blue or black or brown or dark red, because they said, ‘Oh, poor people don’t do their laundry as often as rich people. So they don’t want light colors.’ Well, [our] best seller that year was white, and the second best seller was pale yellow.”

What is more important: white towels, or Martha Stewart not being the Cool Grandma we thought she was? Ugh we can’t choose. We’re going to make buttercream and cry into it, BRB.