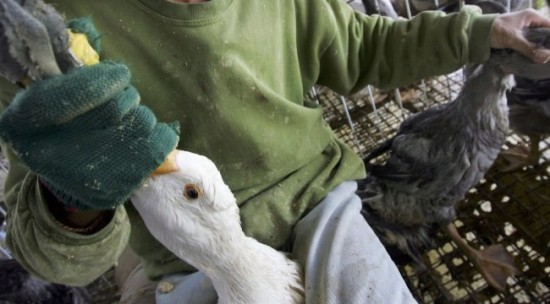 Facing a statewide ban on the sale of foie gras, California’s most prominent chefs have begun lobbying their representatives to reconsider the legislation.

Thomas Keller, Ludo Lefebvre, Tyler Florence, and Michael Chiarello are among the hundred-plus chefs attaching their names to a backronym’d group of restaurant associations and industry professional called the Coalition for Humane and Ethical Farming Standards (CHEFS).  The San Francisco Chronicle reported that the group is proposing stricter regulation on foie gras farmers to make sure that the ducks live a humane, pain-free life, instead of simply banning foie gras altogether.

We highly recommend going through the article to see how the California chef community is reacting to the prospect of the ban.  Chiarello, for one, thinks that the animal rights activists behind the bill are going after the little guys: “The idea of trying to get through the shell of large agribusiness is almost impossible, so they go after the one one-hundredth percent of all animals consumed in the state.”

Traci Des Jardins points out that even if the ban is enacted, it’s not going to decrease the demand for delicious fatty duck livers.  “”I took it off [my menu] at one point in time, and got a very negative response from customers. So there’s definitely a desire for it, and people don’t care where it comes from.”

“They’ve had all this time to figure it out and come up with a more humane way,” he said, referring to the fact that the bill passed through the legislature in 2004, though it will not be enacted until July 1st.  “I’d like to sit all 100 of them down and have duck and goose fat – better yet, dry oatmeal- shoved down their throats over and over and over again.”