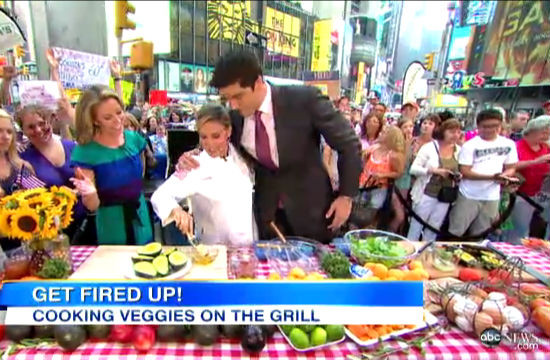 It’s hard out here for a celebrity chef who just got busted for a DUI. Cat Cora may have gotten just the tiniest bit flustered on the set of GMA this morning, where she was prepping a low-fat Cobb salad with grilled avocado in honor of ladies everywhere. (You know, because she’s the only lady Iron Chef, and was recently the first woman to be inducted into the Culinary Hall of Fame…and ladies are supposed to looove low-cal things? Whatever, she put prosciutto on it, we forgive her.)

So, for whatever reason, Cat was feeling a little nervous and accidentally called Good Morning America anchor Josh Elliot “Matt” when he gave her a squeeze, congratulating her on her Hall of Fame induction. Uh, Matt? As in Matt Lauer, anchor of The Today Show, which is on NBC and not ABC at all? You know, it’s just so damned difficult to keep those handsome morning news anchors apart. Their suits all look the same! We feel you, girl. The gaffe was definitely only a slip of the tongue, though, because she manages to call Josh by the correct name both before and after the “Matt” incident. Maybe it was the awkwardness of the one-armed hug? Does Matt give a lot of those? And all she could think was “whyareyoutouchingmewhyareyoutouchingmewhyareyoutouchingme MATT?”

In any case, totally awkward, and only made more awkward by the fact that they all pretend not to have noticed and just keep talking about low calorie salads, Josh’s inability to whisk (it’s a wrist coordination thing), and Cat’s new iPad app “Cat Cora’s Kitchen.”

Check out the clip below!