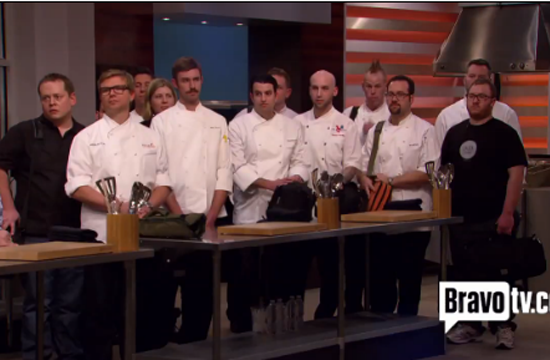 Remember how we just revealed the lineup for Top Chef Masters: Season 5 this morning? And remember how Bravo also announced that it would run another online cooking competition, “Battle of the Sous Chefs,” along with this season? Remember being slightly confused as to how this all breaks down?

Relieve your confusion, dear watcher, for Bravo just released the first episode of Battle of the Sous Chefs, hosted by Hugh Acheson. The rules are simple: the sous chefs have to compete in their own side competition as their bosses swear at each other and jump out of airplanes. The winning sous gives their boss immunity, while the three sous on the bottom give their bosses “extra hurdles” during elimination challenges. What are those hurdles? We’re not gonna know until the series premieres on July 24th at 10 PM EST.

And trust us, the chefs and their sous are just as shocked as we are about this new twist. Check out their surprised faces below (as well as Sang Yoon’s “I will end you” expression), as well as the full list of chefs, their sous, and their charities after the video: