Why is There a ‘Best Female Chef’ Award on The 50 Best List? 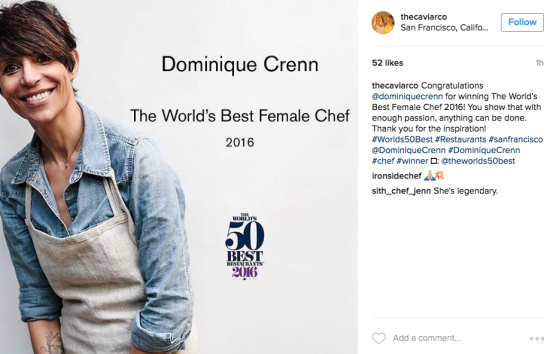 The old stereotype is that women belong in the kitchen, and yet of course, the culinary industry is completely dominated by men. For every April Bloomfield, there are twenty Mario Batalis. And it’s not because women can’t cook. The vast majority of home cooks are women. But professionally, they’re not doing it. Restaurants kitchens in major cities are mostly run by men.

This was evident last night at the ceremony for the World’s 50 Best Restaurants. Out of fifty restaurants, two have women running them. Though small, it was a good showing. Central, in Lima Peru, run in part by Pia Leon  came in at number four, and Arzak in San Sebastian, Spain, run by Elena Mari (though, it’s worth noting that they’re both co-running their restaurants with men) was ranked 21. People attribute the lack of prominent lady chefs to the notoriously difficult lifestyle of a cook. Long days and longer nights and lots of time away from home make it difficult to be a chef and have a family, and plenty of people choose family. I’m not sure that the number of women chefs that are recognized by major organizations is an issue. What is an issue, is how we talk about them.

It’s shocking that the World’s 50 Best List has an award for “Best Female Chef.” What is a female chef? Isn’t she just a chef? Last night, the award was given to Dominique Crenn. As one commenter on the above Instagram post notes, Crenn is legendary. The French-born chef holds two Michelin stars, and is the first woman to be awarded two. In its second season, she was featured on an episode of the hit show Chef’s Table. And yet, every time she’s recognized, it’s with the qualifier that she’s a woman. “Best Female Chef.” It’s essentially saying, “she cooks well…for a girl.”

I’m not a mom, but if I had a daughter, I wouldn’t want her to aspire to be the “best female ____.” Why aren’t we calling Dominique Crenn one of the best chefs in the world, no qualifier? That’s what she is. The recognition that comes with being awarded Best Female Chef is wonderful and deserved, and Crenn earned it. We just wish it could be called something else.