Guy Fieri's Cameo in The Interview

WTF, Guy Fieri Is In The Interview?! 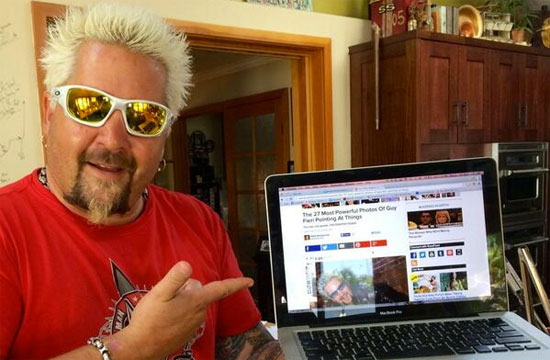 We have our own thoughts and opinions on this whole Sony hack and The Interview debacle, none of which are really appropriate for this kind of website. But what is appropriate for this website: wondering what the eff Guy Fieri is doing in the most controversial movie of the year.

That’s right, there is a dose of Flavortown in The Interview, none of which makes any sort of sense to us. (Well, we mean, unless those muffler TV commercials told us anything.) We were sort of hoping to just avoid this whole movie at all costs, but then Eater was the one that first caught a glimpse of Fieri in the movie’s trailer, making some sort of jovial appearance with James Franco’s character (at the 0:49 mark).

And we were like what, really? Maybe it was just a fluke?

Evidently, some others had way bigger issues with it (maybe a little harsh, Jason Biggs).

“@Eater: You guys, @GuyFieri makes a cameo in that movie The Interview” But they kill Kim Jong Un instead??

And then we kept digging and it sounds like Fieri is in an entire scene, maybe? Vulture dropped this tiny nugget while interviewing supporting actor David Diann and others (emphasis ours):

Diaan: I actually had a controversial role: I played the prime minister of Palestine. There was a scene toward the end of the movie where James Franco’s character goes on to solve other world issues. We had an amazing scene with that famous chef, that guy with the bleached hair … Guy Fieri. We’re cooking in a kitchen in part of James Franco’s show, and he has the prime minister of Israel and the prime minister of Palestine eating falafel sandwiches. We each taste one and we say, “It’s good, oh my god, it’s delicious.” And then Franco says, “See? You’re both eating the same falafel, and you can agree on that, so you can agree on anything!” I don’t even know [if my scene made it into the final movie]. Friends have told me they saw me in the preview. … I know I will definitely be in the DVD version of it, if the DVD version ever comes out.

Okay … So, can someone else watch this horrible looking movie and tell us how he does? Because we seriously don’t want to see it to believe it.