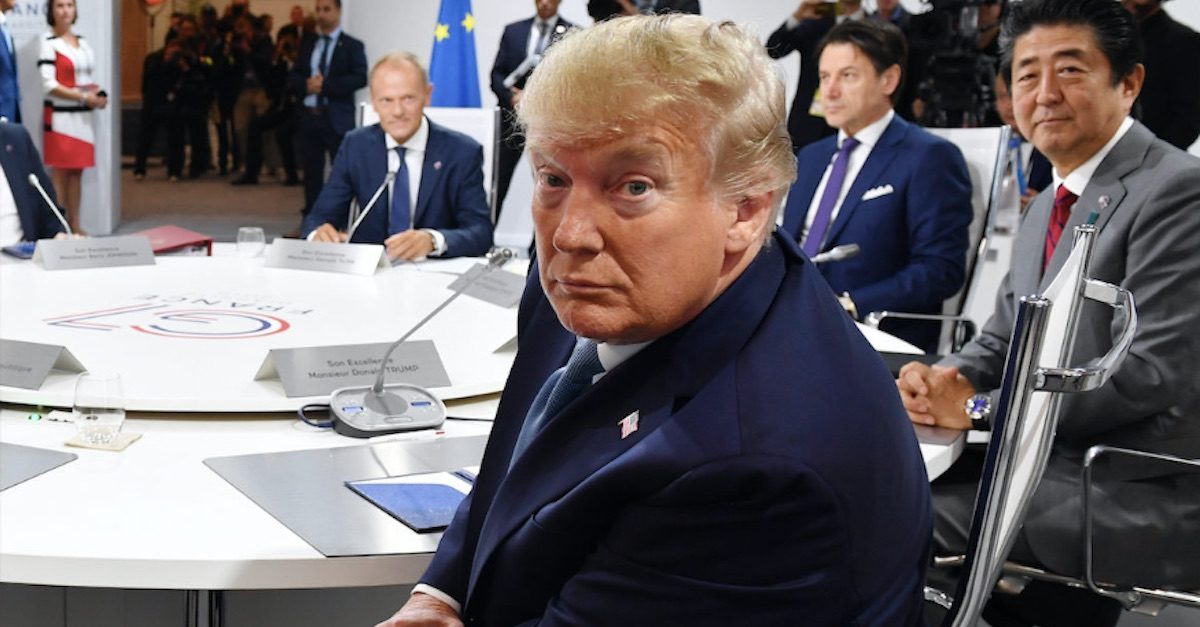 The whistleblower complaint at the center of the current scandal threatening the very existence of the Trump administration has just been released, adding yet another piece of evidence for President Donald Trump to defend amidst the uproar of increasingly perilous criticism.

“In the course of my official duties, I have received information from multiple U.S. Government officials that the President of the United States is using the power of his office to solicit interference from a foreign country in the 2020 U.S. election,” the complaint starts.

The interference includes “pressuring a foreign country to investigate one of the President’s main domestic political rivals,” per the complaint. The whistleblower points to Rudy Giuliani, the president’s personal lawyer, as a “central figure in this effort,” and Attorney General Barr as appearing to be “involved.”

Read the full complaint here, and watch CNN’s breaking news coverage of the complaint below.

In a statement, House Intelligence Committee Chairman Adam Schiff (D-CA) wrote, “This complaint is a roadmap for our investigation, and provides significant information for the Committee to follow up on with other witnesses and documents.”

Perhaps the most damning allegation in the complaint comes in section II — titled “Efforts to restrict access to records related to the call” — in which the whistleblower claims that there was a direction to remove specifics from White House records — suggesting knowledge of wrong-doing and a potential coverup.

Regarding directed interference, the complainant claims the following:

White House officials told me that they were “directed” by White House lawyers to remove the electronic transcript from the computer system in which such transcripts are typically stored for coordination, finalization, and distribution to Cabinet-level officials.

Instead, the transcript was loaded into a separate electronic system that is otherwise used to store and handle classified information of an especially sensitive nature. One White House official described this act as an abuse of this electronic system because the call did not contain anything remotely sensitive from a national security perspective.

I do not know whether similar measures were taken to restrict access to other records of the call, such as contemporaneous handwritten notes taken by those who listened in.

The existence of the complaint came to light roughly a week ago and centers on reported claims of “urgent” national security concerns that surround a phone call between President Trump and Ukrainian President Volodymyr Zelensky.

Starting in mid-May, I heard from multiple U.S. officials that they were deeply concerned by what they viewed as Mr. Giuliani’s circumvention of national security decision making processes to engage with Ukrainian officials and relay messages back and forth between Kyiv and the President. These officials also told me:

• that State Department officials, including Ambassadors Volker and Sondland, had spoken
with Mr. Giuliani in an attempt to “contain the damage” to U.S. national security; and

• that Ambassadors Volker and Sondland during this time period met with members of the new Ukrainian administration and, in addition to discussing policy matters, sought to help Ukrainian leaders understand and respond to the differing messages they were receiving from official US. channels on-the orre-hand, and-from-Mr. Giuliani on the other.

The complaint ends with the allegation that Trump’s future meetings with Zelensky were dependent on whether the Ukrainian President was willing to “play ball”:

During this same timeframe, multiple U.S. officials told me that the Ukrainian leadership was led to believe that a meeting or phone call between the President and President Zelenskyy would depend on whether Zelenskyy showed willingness to “play ball” on the issues that had been publicly aired by Mr. Lutsenko and Mr. Giuliani. (Note: This was the general understanding of the state of affairs as conveyed to me by U.S. officials from late May into early July. I do not know who delivered this message to the Ukrainian leadership, or when.)