Protests Over Election Begin to Flare in Manhattan

Protests Over Election Begin to Flare in Manhattan 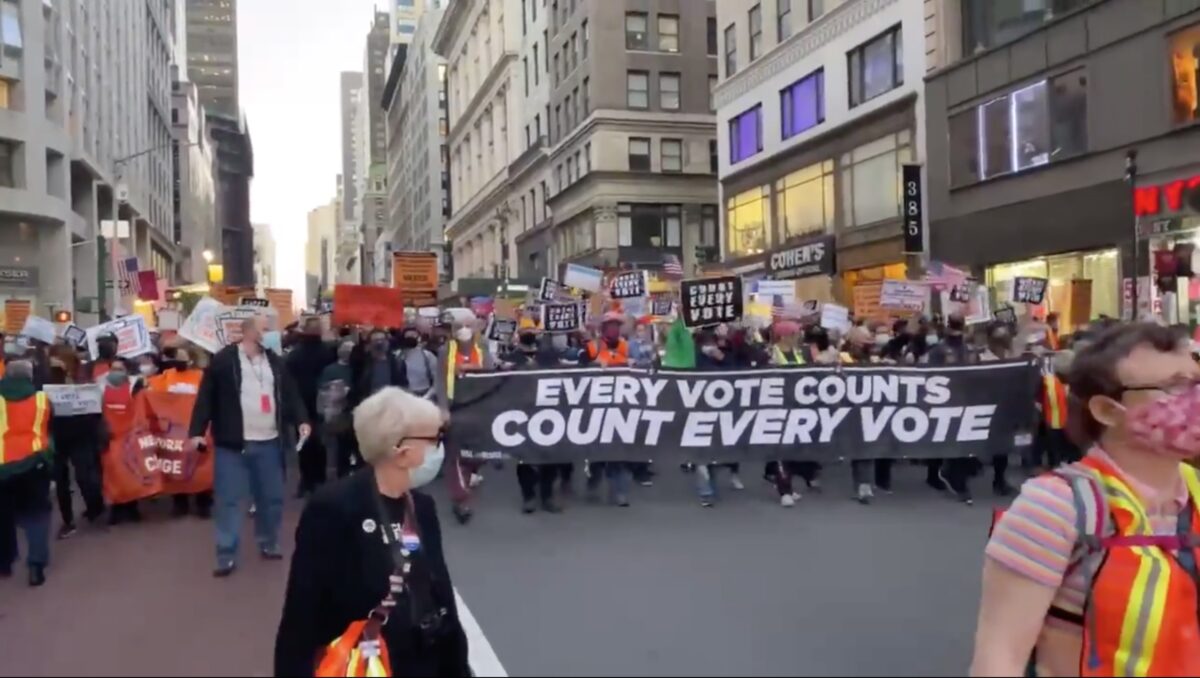 Hundreds of people gathered in Manhattan on Wednesday evening to protest how votes were being counted in the 2020 election.

The group, which gathered on 5th Avenue in the early evening for a march to Washington Square Park, displayed signs and banners in support of “Count Every Vote,” a movement supportive of efforts to extend voting deadlines and to allow for more flexibility in the way balloting is conducted.

“Count every vote” protest rally taking place now in front of #Manhattan‘s main @nypl New York Public Library. I imagine will be one of many this week. pic.twitter.com/HsMXEwRBNw

One of the first major protests in NYC pic.twitter.com/q4IQeY848w

The protests come amid growing controversy over the counting of votes in a handful of swing states, particularly in Pennsylvania, where officials as of Wednesday morning had yet to begin counting more than 1 million mail-in ballots. President Donald Trump held a 266,654 vote lead over Democratic presidential nominee Joe Biden in the state as of Wednesday evening, according to a tally by the Associated Press. That figure represented a lead of about 4 percent, a sharp decline from the roughly 8 percent lead Trump held around noon.

Thirteen percent of votes in the state were still uncounted as of Wednesday night. Democratic Attorney General Josh Shapiro said earlier in the day that he expected to see those added to the count by the “end of the week.”

The demonstrations also come after extensive preparations by businesses in cities including New York for the prospect of unrest this week, with proprietors boarding up storefronts to defend against election-inspired violence.

Surreal vibe in Manhattan. Gorgeous day, lots of people out. There’s even a line outside of 230 Fifth, complete with surly bouncer.

Meanwhile, it seems like half of the city’s retail is getting boarded up pre-election (including the Empire State Building’s entire facade.) pic.twitter.com/y0izbrtSfR

Former White House press secretary Ari Fleischer warned his followers on social media to “stay away” from Wednesday’s gatherings in New York. “I’m told five different groups have ‘protests’ planned there today,” Fleischer wrote on Twitter. “I have no idea what they’re “protesting.”