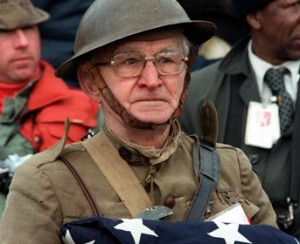 But imagine, for a second, that it really is the year 11 A.D., making today, truly, 11/11/11. The Internet is abuzz with mentions of it being “Nigel Tufnel Day,” a nod to the Spinal Tap guitarist who pointed out that the band’s equipment volume goes all the way up to 11. It’s a clever celebration of the dim-witted rocker. But — and this is not an attempt to ruin everyone’s fun and throw cold water on the movement — the proliferation of Nigel Tunfel Day has gotten just a little too annoying, failing to recognize the other holiday that falls on Nov. 11; namely, Veteran’s Day.

The federal holiday was originally concocted as “Armistice Day,” an occasion to remember those who fought in World War I. Even back in 1918, when the cessation of fighting occurred, people had an idea of the numbers they could play with, knowingly ending the combat at the 11th hour of the 11th day in the 11th month of the year. After World War II, the holiday was extended to include the veterans of all wars.

Veteran’s Day is a federal holiday that too many people overlook. On the subway train this morning in New York, a man in army fatigues was in his seat as a doo-wop group came through the car singing, looking for donations. The group stopped at his seat, one-by-one, and shook his hand as they passed by. When they were through with their song, they thanked him for his service again, then moved on to the next car. Where the doo-woppers succeeded is where Nigel Tufnel Day fails — the group acknowledged the holiday and the serviceman on the train car, while still having their fun. The Tunfel movement and its followers have made very little mention of anything outside of lines from the movie.

Nigel Tufnel Day is, like many things, a good idea with poor execution. “Happy Nigel Tufnel Day” is a funny Tweet and a cute Facebook update, but it comes across as kind of dickish and oblivious (think Ashton Kutcher tweeting about Joe Paterno’s firing without knowing the whole story) if there isn’t a note thanking veterans for their service immediately before or after it.

Even if you’re the world’s biggest Spinal Tap fan and a huge opponent of war, today’s a day to honor those who have fought for, among many other things, our ability to use Facebook to waste time wishing people a Happy Nigel Tufnel Day. Today isn’t meant to be a somber occasion, and it’s not meant to bring in views on war or the government; it’s meant to be a day to say thank you to the men and women in the armed services.

Take a page from the R-train doo-wop group’s playbook. Have your fun, do your job, and then take your time to say thanks. And if you see anyone in uniform out tonight, drag them into the nearest bar and buy them beers. The holiday was originally concocted with the intent of stopping everything at 11:00 a.m. and remembering our veterans, even for a few moments. There’s still room in the rest of the day to enjoy some Nigel Tufnel. Just at least try to balance it out with some respect for our veterans.