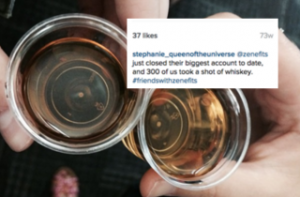 Sometimes, the jokes write themselves, people. The company I’m going to tell you about has outlawed sex at its headquarters after finding too many used condoms on the premises. The company is called Zenefits. Zenefits! That’s the name of a company where employees were having next-level parties, getting wasted at their desks, and then doin’ it in the stairwells. Zenefits! Like benefits! The perks you get when you take a job somewhere!

This time, of course, the benefits weren’t dental insurance and some vacation days. At the health insurance brokerage company, they were liquor, sexcapades, and a corporate culture that brought in a new boss who would not abide.

At The Wall Street Journal, that culture is carefully referred to as “rambunctious.” They reported that the new chief executive, David Sacks, decreed that there was to be no more alcohol at the offices. This followed a staff-wide email sent by Emily Agin, the company’s director of real estate and workplace services. Check it out:

It has been brought to our attention by building management and Security that the stairwells are being used inappropriately….Cigarettes, plastic cups filled with beer, and several used condoms were found in the stairwell. Yes, you read that right. Do not use the stairwells to smoke, drink, eat, or have sex. Please respect building and company policy and use common sense..

Sacks moved quickly to ban all drinking, stating that it was too hard to define “appropriate” and “inappropriate” in-office indulging, so the whole practice had to be scrapped in order to create a more “mature” atmosphere.

On Monday's we wear green #friendswithzenefits

Per Buzzfeed, employees thought nothing of posting photos of themselves preparing a table full of shots to celebrate when someone in the sales department landed a big client. Since Sacks’ new liquor ban, however, those photos have been taken down or privatized, though the screen shots live on across the Internet.

Silicon Valley jobs are especially notorious for their party-like culture, in part because they hire so many young people. Speaking as a 20-something in New York, I can vouch that many tech startups even have, as WSJ says, a “rambunctious” reputation all the way over here on the East Coast. Read this for a better understanding of why millennials might be hesitant to swipe right on someone who works for one of these bad boys. (That is, if they even want to date at all.)

Still, tech startups are hardly the first companies to be plagued by bad behavior. Influential newspapers have to drug test their employees. Joe Scarborough has smoked and drank on air. Don Lemon has been plastered and made lewd comments on live TV. Bill Maher smoked a joint during a broadcast. It needs to be pointed out, of course, that these are incidents so isolated that they prompted write-up ripples across the blogosphere. At Zenefits, shots and hookups were daily occurrences, yet there was hardly a blip on he news radar until Sacks came on-board.

That explains why founder and CEO Parker Conrad resigned this month while Scarborough and Lemon remained on television. Sacks may find it difficult to parse the line between appropriate and inappropriate, but it seems to have become evident once that line was irrevocably crossed. In his own letter to the staff earlier this month, he put it like this:

The fact is that many of our internal processes, controls, and actions around compliance have been inadequate, and some decisions have just been plain wrong. As a result, Parker has resigned.

Alas, nothing gold(schläger) can stay.