ABC News Asks: Will News Of The World Scandal Bring Down Murdoch Empire? 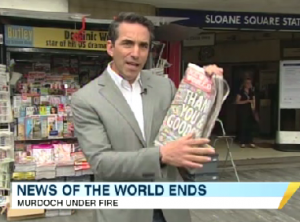 As the expanding scandal into the phone hacking at now-gone British tabloid News of the World brings News Corp. chairman Rupert Murdoch to the U.K. to do damage control, questions are being asked what impact the ongoing British investigations may have on the wider Murdoch media empire, specifically the U.S. based company. The U.K.’s Guardian asks this morning whether Murdoch’s son James, long believed to be the one groomed to replace his father atop at News Corp. in New York, may become a liability. “America is largely uninterested in the scandal’s details, but its causes might point to a long-term systemic weakness in the company.

If James Murdoch does not have control over the company’s key executives, or the autonomy or desire to fire them when it is expedient to do so, then this is likely to have a much more profound and far-reaching impact on how News Corp is run globally in the future than the immediate international ramifications of the phone-hacking case.”

ABC News goes so far as to ask a massive media question: could the scandal threaten to “bring down” the Murdoch empire? The network’s coverage from London mentions a widely held belief that while a 168 year old newspaper has been shut down–and hundreds have been put out of work–the managers at the top have remained in place. “In the eyes of many, the often sensational weekly tabloid was brought down by management that still refuses to acknowledge its own role in the ongoing scandal.”

Watch the story, from ABC News: