Sarah Palin To Newsweek: ‘I Can Win A National Election’ 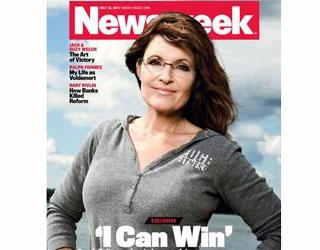 Sarah Palin, whose bus tour and movie premiere in, of all places, Iowa recently prompted a new wave of speculation that the former governor has her eye on the White House in 2012. Now, Newsweek‘s latest cover story on Palin has gotten tongues wagging anew. As she told the magazine’s Peter Boyer while in Iowa for that aforementioned premiere of The Undefeated, she believes her chances are pretty good:

I believe that I can win a national election.

Mind you, Palin has yet to make an official bid. As for her eldest daughter Bristol’s recent claim that Palin had already made up her mind about running, Palin tells Boyer that while “Bristol wants me to run for president,” Palin herself is “still thinking about it,” citing the well-being of her family as a factor in her decision-making. In fact, a good portion of the interview is dedicated to Palin’s interactions with her husband, Todd, and their children. To wit:

But before we began, she and Todd, both working their omnipresent BlackBerrys, conducted a bit of urgent family business.

SARAH: I have to answer Piper real quick. She is not going to get her hair cut. What is she thinking?

SARAH: You need to tell her that, she’ll obey you … You told her no, Todd? OK, I’m puttin’ mine away.

The major takeaway seems to be that Palin is examining the GOP field with a shrewd eye, and weighing her options carefully. She she told Boyer about the media’s focus on potential, currently undeclared GOP candidates such as herself, “the field is not yet set.” Also of note: Palin’s “independent” streak:

The interview provides an increasingly rare instance of Palin speaking directly to a member of the mainstream media (who isn’t Greta Van Susteren or Sean Hannity). As Palin’s wildly popular use of the phrase “lamestream media” would attest, there’s a reason for that:

The mainstream press is becoming less and less relevant.

I would say no to those who have lied about me. There is no need to reward bad behavior. I’ve learned. You know, once bitten, twice shy. I have learned.