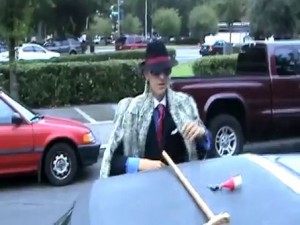 James O’Keefe — the upstart investigative filmmaker whose undercover video work got ACORN’s federal funding stripped — has been arrested by the FBI in Louisiana for attempting to wiretap the offices of Democratic Senator Mary Landrieu, according to the Times-Picayune. The paper is reporting that the FBI arrested O’Keefe and three others — Stan Dai, Joseph Basel and Robert Flanagan — two of whom dressed as telephone company workers to tap the Landrieu’s office telephone system. O’Keefe was reportedly posted inside the office and claimed to be “waiting for someone to arrive.”

Mediaite first chronicled O’Keefe’s rise to prominence when he posed undercover as a pimp looking for ACORN financing to run his fake prostitution ring, which resulted in the U.S. Census stopping work with the group. He also wore a pimp costume on Fox News, prompting us to interview some of O’Keefe’s former classmates to learn more about the man who brought such attention to himself and the then-newly launched BigGovernment.com.

O’Keefe had given a speech last week to Libertarian Pelican Institute for Public Policy in New Orleans, where he discussed “the role of new media and show examples of effective investigative reporting,” according to the paper. Now, it seems he took his undercover investigations too far. You could even say he got a little too big for his costume britches.

“We have no knowledge about or connection to any alleged acts and events involving James O’Keefe at Senator Mary Landrieu’s office. We only just learned about the alleged incident this afternoon. We have no information other than what has been reported publicly by the press. Accordingly, we simply are not in a position to make any further comment.”

A Press Release from the US Attorney’s Office, Eastern District of Louisiana:

ineStates General Services Administration, also inside the Hale Boggs Federal Building, where they again represented themselves to be employees of the telephone company and stated that they needed to perform repair work in the telephone closet. Both FLANAGAN and BASEL stated that they had left their credentials in their vehicle. In addition, the complaint alleges that O’KEEFE and DAI assisted FLANAGAN and BASEL in the planning, coordination, and preparation of the operation. The men were apprehended by the United States Marshal’s Service soon thereafter.

If convicted, FLANAGAN, BASEL, O’KEEFE, and DAI each face a maximum term of ten years in prison, a fine of $250,000, and three (3) years of supervised release following any term of imprisonment.

The United States Attorney’s Office reiterated that the complaint is merely a charge and that the guilt of the defendant must be proven beyond a reasonable doubt.

The investigation is being conducted by Special Agents of the Federal Bureau of Investigation and Deputy Marshals with the United States Marshal’s Service. The case is being prosecuted by Assistant United States Attorney Jordan Ginsberg.