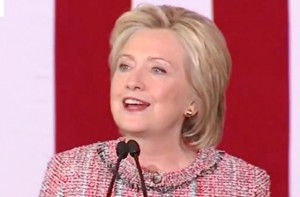 Hillary Clinton has received another historic endorsement, this time from a prominent newspaper that’s been in favor of Republican candidates since its founding back in 1890.

The Arizona Republic‘s editorial board has decided to join Dallas Morning News and the Cincinnati Enquirer in revolt against Republican nominee Donald Trump, saying that Clinton is “the only choice to move America ahead.”

The Republic acknowledges that they prefer conservative ideals and that Clinton has several significant flaws, but they argue that those flaws pale in comparison to Trump’s. The paper also talks at length about how Clinton represents an experienced and responsible direction of leadership for the country, whereas Trump is alarmingly impulsive and unqualified for the presidency.

“She does not casually say things that embolden our adversaries and frighten our allies. Her approach to governance is mature, confident and rational.

That cannot be said of her opponent.

Clinton retains her composure under pressure. She’s tough. She doesn’t back down.

Trump responds to criticism with the petulance of verbal spit wads.

That’s beneath our national dignity.”

The paper argued that Clinton is the only candidate politically savvy enough to offer any promise of change to immigration policy, even if the people prefer Trump’s perspective on the issue. Calling Trump a threat to national security, the paper concludes by stating that Trump’s incendiary rhetoric and lack of policy knowledge have had a damaging effect on America, and that the country requires Clinton’s more tempered approach to fix it.

“We have never endorsed a Democrat over a Republican for president. Never. This reflects a deep philosophical appreciation for conservative ideals and Republican principles. This year is different.”