After Saying He’ll Still Be ‘Happy’ If He Loses, Trump Says Not Winning Will Make Campaign a Waste of Time
video

After Saying He’ll Still Be ‘Happy’ If He Loses, Trump Says Not Winning Will Make Campaign a Waste of Time 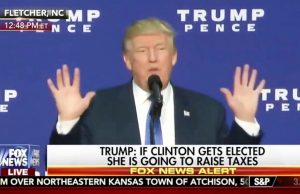 “We’re gonna do this for another 19 days, right up until the actual vote of November 8,” he said. “And then I don’t know what kind of shape I’m in but I will be happy and at least I will have known, win, lose, or draw — and I’m almost sure if the people come out we’re gonna win — but I will be… I will be happy with myself.”

Sounds kind of like he moved away from the “waste of time” talking point, right? Maybe like he contradicted himself?

Well, don’t worry. Just minutes after saying that he’d still be happy if he lost, he said, “We gotta win. What a waste of time, if we don’t pull this off!”

He was likely going to finish that thought with “the biggest waste of money,” as usual, but he went off on a tangent about unfair political ads and never finished the thought.