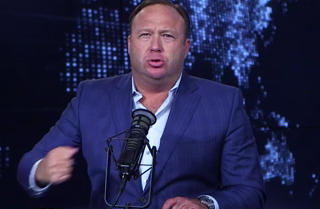 While I was preparing to write this post, I searched Mediaite for all of our past coverage of the Alex Jones vs. Glenn Beck feud and did I ever get results.

In 2013, Jones called Beck “despicable” and Beck labeled Jones a “madman,” which is when we really started paying attention to the rivalry between these two conservative radio icons. Little did we know then what would transpire in the years to come. In 2014, Jones called Beck a “Judas goat,” and he didn’t mean G.O.A.T. like “greatest of all time.” He publicly compared his enemy to a traitorous farm animal. (George Orwell could only wish to be so succinct and cutting!)

Fast forward to 2016 and the feud is still raging. Beck, who has been basking especially frequently in the limelight since endorsing Ted Cruz, took a shot at Matt Drudge, saying no news that comes from Drudge can be trusted since he started hanging out with Jones, a known conspiracy theorist.

Jones has now hit back, and truly, the time has come for some intervention between these two petulant public figures. For proof, consider the title of Jones’ most recent video, during which he addressed the accusations that he poisoned Drudge’s mind and ruined his credibility: “How Ted Cruz is a Lying Psychopath.”

If that isn’t childlike enough, in the video, he called Beck a “cult leader … an official religious cult leader,” a “false prophet,” and a “cynical, twisted, weirdo” after bringing up what his foe said about Drudge. After taking aim at Beck’s religiosity, which is not especially fair, he literally went after Beck for drinking too much Diet Coke.

He called him an ego maniac. He said he was a “super narcissist” and “probably psychotic.” Then, he went off on how Beck has modeled his entire career after his own, so there is that. He called him self-obsessed and then called him a copy cat.

That’s it. Boys, listen. This name-calling has to stop. The hypocrisy has got to stop. Only kids accuse one another of being psychos or copying each other. So help me, I will put you both in time-out. I mean it. If you want to act like babies, we will treat you like babies!

Watch that and try to tell me this hasn’t devolved all the way back to kindergarten.