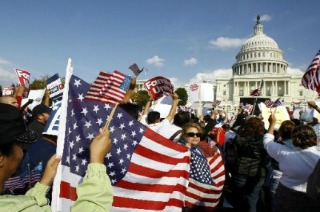 In the wake of the April 15 Boston Marathon bombing, CNN/ORC has released a new poll showing conflicting conclusions about how Americans have internalized the lessons of that attack. Most surveyed said that the preservation of civil liberties should be American elected officials’ first priority and not passing new laws intended to make it easier to target potential terrorists. However, Most surveyed said that they support an expansion of law enforcement’s ability to monitor online conversations and favor an increase the number of cameras monitoring pedestrian traffic in public spaces.

The latest CNN/ORC poll could be broadly interpreted by civil libertarians as good news. A majority of those surveyed, 63 percent, say that terrorists will find a way to attack the U.S. no matter what. Only 32 percent say new laws and added vigilance could prevent every conceivable terrorist event. That number is remarkably stable among subgroups. 63 percent of both women and men sampled said that terrorists will find a way to execute an attack if they are so inclined.

Things get a little more confusing as the survey progresses. Only 49 percent said that they would not consider surrendering some of their liberty even if it could curb future incidences of terrorist violence. 40 percent said they would be “willing” to “give up some civil liberties” to ensure future security.

A vast majority – 81 percent to 18 percent – favor expanded camera surveillance on streets and in public places. This figure likely buoyed by the fact that both Boston bombers were first identified by footage from a surveillance camera outside a retail outlet.

Self-identified Democrats and Republicans both strongly favor expanding the monitoring of online communications in chat rooms. Only self-identified independents were split; 48 to 46 percent favor such a move, well within that subgroup’s 6.0 percent margin of error.

CNN closes this schizophrenic survey with a note of optimism. 70 percent of Americans say they will not change their behavior patterns as a result of the attack in Boston and plan on attending large public events in the near future.