An African-American High Schooler Volunteered at the Trump Campaign. Here’s What He Saw. 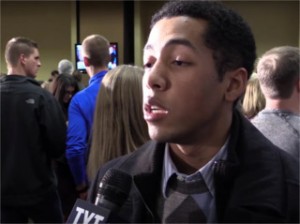 In a new video from The Young Turks, an African-American high school junior described his experience after he spent Caucus Day volunteering at a Donald Trump campaign office in West Des Moines.

“I just wanted to make sure I wasn’t critiquing out of ignorance,” James Patterson told TYT reporter Jordan Chariton. “I saw what he said on TV, but I also know how the media works, so I wanted to see it for myself.”

Patterson spent Monday making phone calls on behalf of the Trump campaign. He noted that he was the only black person in an office with about 20 people. Of his experience interacting with other Trump supporters, Patterson said:

Patterson said that Trump supporters were “normal people who have these resentments towards minorities, not able to voice them because thankfully we have policed language to the effect that that’s not acceptable. But they still hold these — and this is their way to show that.”

Patterson said that his co-volunteers were “very friendly” and “normal people,” which he found unnerving given that they supported Trump’s policies.

Patterson said that neither political party had a monopoly on ignorance when it came to issues of race and ethnicity. “It’s been so accepted in our policies, whether they come from Democrats or Republicans,” he said.

“Sure, everybody has the right to say whatever they want,” Patterson said. “However, there is something called respect. And Trump is not respectful. And there is something wrong with our society when we can glorify somebody openly that condemns” entire groups of people, like Mexicans and Muslims.

He added that he believed Trump’s campaign had pitched its message narrowly to “fundamentalist Christian, white, middle-class Americans that feel like their power is being taken… because minorities are making strides.”

“When he speaks to that, there’s no way he can be pro-black or pro-Hispanic or pro-minority, and have that campaign,” Patterson concluded.