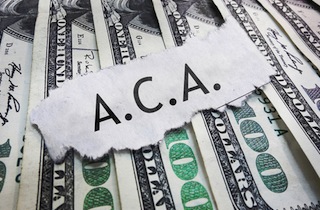 In a ruling that could turn out to be devastating for the Affordable Care Act, the U.S. Court of Appeals for the D.C. Circuit ruled the subsidies issued through Obamacare’s national health exchange violated the language of the bill.

Halbig v. Burwell rests on the phrasing of the PPACA bill, which stipulated that subsidies to purchase health insurance could be offered for an exchange “established by the State.” Thirty-six states chose not to construct their own exchanges, leaving the national health care exchange (you may recall something about a website?) to advance the majority of the subsidies.

A lower court upheld the subsidies, ruling there was no evidence Congress intended to deny subsidies through a national exchange, and that in fact doing so would run counter to the point of the bill. However, in a 2-1 decision Tuesday, the Appeals Court threw out these subsidies as contrary to the language of the bill.

“We reach this conclusion, frankly, with reluctance,” the judges wrote. “At least until states that wish to can set up their own Exchanges, our ruling will likely have significant consequences both for millions of individuals receiving tax credits through federal Exchanges and for health insurance markets more broadly.”

The case will almost certainly head to the Supreme Court, where the ACA has had mixed results. (UPDATE: It’s also possible the case could have an en banc ruling before the entire District Court, which has a much more left-leaning mix of judges. We shall see.)