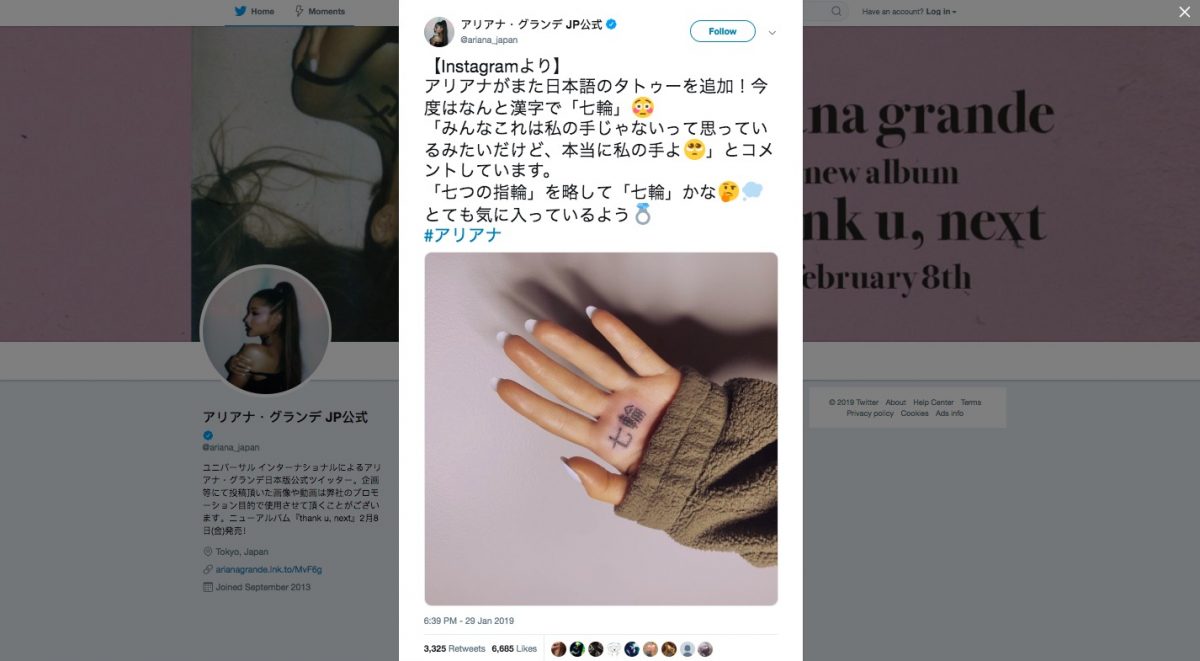 Pop superstar Ariana Grande was slammed for cultural appropriation today after she attempted to get “7 Rings” — the name of her new hit single — tattoed on her hand in Japanese Kanji, but intentionally left out key characters for aesthetic reasons that totally changed the meaning of the tattoo.

After initially posting a picture of her new ink on Instagram, Grande deleted the post when commenters began calling her out for the error, which changed the meaning of her tattoo from “7 rings” to “shichirin,” which is a small BBQ grill popular in Japan.

“Indeed, I left out ‘つの指’ which should have gone in between. It hurt like fuck n still looks tight. I wouldn’t have lasted one more symbol lmao,” she wrote in a tweet, which she also deleted. “But this spot also peels a ton and won’t last so if I miss it enough I’ll suffer thru the whole thing next time.”

Grande’s explanation just led to even more people being outraged though, as she admitted to knowingly leaving out characters and getting a misspelled tattoo because it looked “tight.”

So @ArianaGrande just removed essential characters and wrote “BBQ grill” instead of “7 Rings” on her hand then just called it a day because…she respects Japanese culture? ? pic.twitter.com/KXZGqnQE6i

ariana grande and scarlett johansson when they both decide to transform into the same race pic.twitter.com/FiLdxzoQCQ

ariana grande’s dumb ass got a tattoo of an entree and has the audacity to be like o lol i didnt want to sit thru it bc it hurt uwu so basically u care about the aesthetic of kanji but not the meaning of the words?? “indeed” pic.twitter.com/bhCvrEVZuf

okay quick rundown: japanese kanji uses traditional chinese characters for its writing system and they share many similar though not all the same meanings. they are pronounced completely differently because the two languages are different.