Associated Press Headline Is Grazed By Mockery Of Media Critic 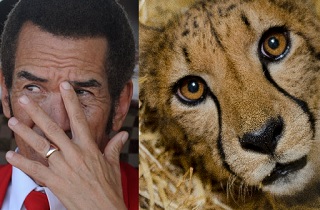 Headline writing in the internet age is equal parts art and science, balancing the traditional goal of summarizing the story in a gripping way with the newer, more mysterious need to trick search engines into picking your story first, to get you on the SEO Speedwagon. I’m not sure either of those considerations won out when the Associated Press composed this headline: “Cheek Of Botswana President Grazed By Claw Of Overexcited Cheetah.”

I don’t really understand SEO, but as a news consumer, the most interesting parts of that hedline are “President” and “Cheetah,” so it’s strange that the AP led with “Cheek,” and used the most passive construction possible to describe the action:

The Botswanan president’s spokesman says an overexcited cheetah jumped from behind a fence and scratched the leader’s face with its claw.

Spokesman Jeff Ramsay said President Ian Khama had two stitches to his nose after the encounter he described as “a freak accident, not an attack.”

The cheetah is part of a menagerie kept by soldiers at the Botswana Defense Force barracks at Mogoditshane in Gaberone, the capital.

Ramsay said Khama, 60, went to watch the cheetahs being fed and “one of them got excited and jumped up at him” with its claw reaching above the enclosure. Khama is well over 6 feet (1.8 meters) tall.

Ramsay said “The president was scratched a bit on the nose and elsewhere … the claw basically grazed his face.”

Maybe the word “cheek” is SEO gold, and Botswanan President Ian Khama‘s actual name is Google poison, what do I know? But the AP’s odd headline got me thinking about how other news organizations might have covered this story:

The Daily Caller: “President Scratched By Even Bigger Pussy”

Mediaite: “Botswanan President And Cheetah Get Heated Over Claw Control”