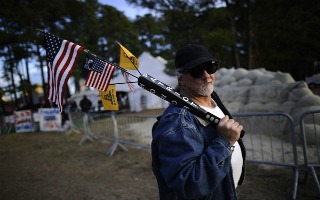 An article in the U.K. Telegraph by Chris Mooney, author of the Republican Brain: The Science Of Why They Deny Science – and Reality, elaborates on his findings that political ideology of average voters is due, in large part, to the accidents of birth. He details how, in his view, the psychology of the GOP voter has allowed the Republican party to exploit “psychological authoritarianism” and demonize cultural and scientific wedge issues to enforce political homogeneity.

RELATED: MSNBC Panel Lectures Conservatives On The Nature Of ‘The Republican Brain’

Mooney writes that American liberals are “open to new experiences and more comfortable with nuance and difference,” while Republicans are “psychologically ‘authoritarian’ and inclined to view the world in black and white.” What’s more, Mooney asserts that 40 percent or more of our political maturation is due to our genetics.

He cites a study from the University of Nebraska’s political psychology laboratory that monitored eye-trackers to study how subjects respond to various images. The study found that liberals look longer at “appealing or enticing images” while conservatives respond more actively to disturbing imagery.

He links this, among other findings, to “a recent study by neuroscientists at University College of London found that the self-described conservatives had a larger-than-average right amygdala, the brain’s region for processing fear and threat.”

But while there are a number of genetic explanations for our political inclinations, Mooney does not discount nurture and socialization – particularly cultural identity – as a major factor that influences our political beliefs:

What’s more, cross-cultural differences will affect our core “natures” very differently in any case, producing highly varied results. The important thing to remember about psychological needs is that they do not have any explicit content – in this case ideology – to them. Someone in Britain today may end up very different from someone with the same psychology in, say, Russia at the time of the revolution. Indeed, in a nominally “Left-wing” totalitarian society, the mainstream view may tend towards nationalism, militarism, authoritarianism and conformity – traits often associated with the Right.

Mooney outlines what he believes is the Republican attack on science that began in the late 1960s which has resulted in liberal dominance in the scientific establishment today. In fact, he notes that in that conservatives regularly populated university campuses in the 1950s whereas today they are “a dying bread.” Mooney attributes this largely to self-selection – Republicans are avoiding institutions of learning due to their political mistrust of scientific advances.

“Troublingly, this “psychology of ideology” research seems to remove our political views from the realm of conscious choice and free will,” writes Mooney.

No one better deflated Mooney’s faux scientific conclusions than Jonah Goldberg in an April 30 opinion piece in USA Today:

Mooney, who recently explained in a speech that he has given up on the Enlightenment view that we’re all open to reason, doesn’t seem to realize where he’s heading with this nonsense. Never mind that this approach is inherently undemocratic and opens the door to “genetic” explanations for everybody’s political views — blacks, women, gays, etc. — it is also self-serving bigotry that allows liberals to justify their own closed-mindedness on the grounds that Republicans aren’t even worth listening to. After all, they’re just born that way.

It is ironic then that Mooney, who assert that liberals, who are “open to new experiences and more comfortable with nuance and difference,” is providing for them a supposedly scientific reason why they can dismiss conservatives outright.