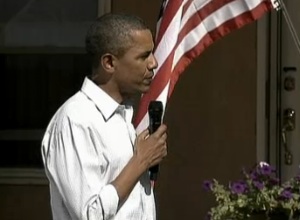 President Obama is in New Mexico today, and ended up fielding some rather “spicy” questions from some local New Mexicans. When a woman asked the president “why he was Christian,” Obama did not demure, saying that he was a “Christian by choice” before launching into an eloquent description of why he follows the path of Jesus Christ, remarks made more relevant given a recent survey that indicated that many Americans mistakenly believe that Obama is in fact a Muslim.

“I think also understanding that Jesus Christ dying for my sins spoke to the humility we all have to have as human beings that we’re sinful and we’re flawed and we make mistakes and that we achieve salvation through the grace of God.”

“But what we can do, as flawed as we are, is still see God in other people and do our best to help them find their own grace. And so that’s what I strive to do. That’s what I pray to do everyday. I think my public service is part of that effort to express my Christian faith.”

“But one thing that I want to emphasize, having spoken about something that relates to me very personally, as president of the United States, I’m also somebody who deeply believes that part of the bedrock strength of this country is that it embraces people of many faiths and of no faith. This is a country that is still predominantly Christian. But we have Jews, Muslims, Hindus, atheists, agnostics, Buddhists and that their own path to grace is one that we have to revere and respect as much as our own.”