Ben Shapiro Roasted Over Blaming Poor People For Having to Take a Second Job: That’s ‘What a Spoiled Rich Kid Says’ 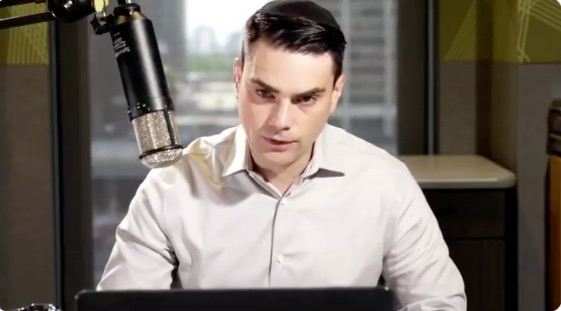 Conservative radio host Ben Shapiro encountered massive disgust and online blowback when he cavalierly suggested that it is poor people’s fault for choosing the wrong job it they are forced to take a second one to get by: “If you had to work more than one job to have a roof over your head or food on the table, you probably shouldn’t have taken the job that’s not paying you enough. That’d be a you problem”

Shapiro’s comments unleashed a torrent of angry rebuttals, some of whom pointed out the falsehood embedded in his logic about how labor markets work, while others pointed out that Shapiro, who comes from a privileged background, sounded just like a “what a spoiled rich kid says.”

Ken Cuccinelli: “Hey, Steve King, I really screwed up with this whole Statue of Liberty thing. Can you help?”

Steve King: “I got you… Rape & incest get a bad rap… Hey Ben Shapiro, I really screwed up with this rape & incest thing. Can you…”

And when you find your smug elitist indifference to the struggles of working ppl didn’t save you from the Ring of Eternal Fire, cackling demons consuming your extremities as your tormented screams go unheard, Satan will softly hiss into your ear “this’d be a Ben Shapiro problem.” https://t.co/dHDdEgQN7T

You heard it here first, folks: if you can’t pay your bills with a single job, the answer is to not work at all until you get one that pays more.

This is the guy who thinks that people with waterfront property will be able to just sell their homes when sea level wipes them out. https://t.co/K1JPHZqkt2

This is what a spoiled rich kid says. So disconnected from reality because daddy paid his way.
Sometimes i feel sorry for how these people don’t truly know, nor understand real hard work. https://t.co/n9bHrnamCD

Show this to every voter who isn’t sure how to vote next year. This is the Republican Party. https://t.co/Rh8dvMYM99

This is the defining ethos of conservatism – the rich are worthy and the poor are bums who have made a choice to be poor. So, they deserve all of their problems and the rich deserve their tax cuts. They have no empathy, a trait they share with sociopaths. https://t.co/TxrczOt43m

I’m almost certainly being too credulous but: how does this kind of mental model develop? How do you get so far removed from the labor market that you think there’s a limitless supply of good-paying full time jobs regardless of your skill set? https://t.co/GNsC8QFCVM

conservative “intellectuals” have one and only one job: blame individuals for problems very obviously caused by external circumstance https://t.co/4oDvPZDml2

Ben Shapiro’s mother was a TV executive and he went to private school, so I’m sure he never had to work more than one job, but I wouldn’t ascribe that to his brilliant decision to hold out for higher-paying work, as he apparently does https://t.co/QX9nM9GGjQ

I agree with a ton of what ben Shapiro says but this is heartless. https://t.co/fmpq9WZ8v2

rich people really have zero concept of reality, at all, not even a little bitty bit https://t.co/J9wpGBPOXL

Props to fellow citizens who work hard+long hours to support themselves+their families, often doing unglamorous jobs that helps us all. I’m reminded of young woman who made me breakfast 7am at Midway Airport. She told a co-worker: “I don’t work for my boss. I work for my kids.” https://t.co/EwCKwaKazF

Would love to see Ben say this to a working person’s face rather than on his little video show funded by Texas fracking billionaires https://t.co/poY2oNzSaM

God, I hate—hate, hate, hate—media members who don’t get how preposterously lucky we are to receive actual money to write/talk. Seriously, @benshapiro needs perspective on how the world works. This is pathetic and painfully entitled. https://t.co/2jrZOwRX5j

In defense of Ben, I don’t think he meant to be insensitive. I think he comes from a life where he was never forced to work two jobs. It feels foreign to him. This is one of those times where the gap in experience spills into the professional realm. https://t.co/CqV3uZegVg

As the tsunami of criticism began to crash onshore, Shapiro began to push back in clear damage control mode, trying to claim his comments were taken out of context and pretend he didn’t blame poor people by saying: “that’s a you problem”

Yeah, Ben Shapiro, why should one bother working as a public school teacher or at a nonprofit if they need a 2nd job since giving back to communities isn’t lucrative? Or imagine being born into poverty & having to care not just for oneself but a child.

I understand why someone would need two jobs. I do not believe that the economy can be or should be structured, through government force, so no one has to work two jobs. That was Harris’ point. https://t.co/QJS6YrS0tJ

Shaming people for being poor is a real classy move. https://t.co/lOVK0pKIY0

That is not the context of the comment, but you are quite good at missing the point. I would never shame someone for earning less. I am distinguishing between decisions you make and decisions others make for you. https://t.co/XgC4BmEeiI